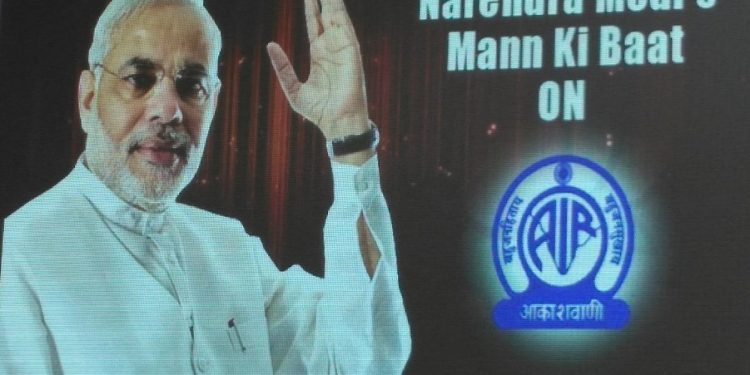 Prime Minister Narendra Modi’s curious habit of talking to the masses through the radio, the signature programme ‘Mann ki Baat‘ touched its 50th episode on Sunday. Residents of Tapobannagar, on the outskirts of Silchar in Assam, a habitat for mostly BPL card holders, the day began with the hustle and bustle of many turning in their locality to hear what their Prime Minister had to say, or listen to the questions put forward by the commoners.

Yes, it’s true as the Prime Minister’s Office (PMO) decided among various other places of India, to hold one session in Silchar for his 50th episode of ‘Maan ki Baat’.

Not to be left out, curious onlookers made a beeline for this place since morning. Local leader and MLA from Silchar, Dilip Kumar Paul too made the necessary arrangements for the place to be filled up with his or his party’s supporters.

Special guest to watch this programme was none other than former Union Minister Kabindra Purkayastha, who too heard with intent. Sharing his experience of connecting with the masses through it, Kabindra Purkaystha, said, “I am speechless. Add to that, PM Modi, speaking directly with the masses, even if through radio ahead of the panchayat elections would hold us in good stead, politically.”

Purkaystha added, “The mass gathering that we witnessed would also unify us for the panchayat elections and dispel any rumours or loose talk about our party or our party candidates that we have fielded for these polls.”

More than a 1000 odd people came to hear what the PM had to say during his radio show. The expectant listeners were glad to hear their PM speak and answer questions that ranged from all walks of life, a point, totally agreed by MLA from Silchar, Dilip Kumar Paul.

Talking to this correspondent at the end of this program, he said, “PM Modi’s Maan ki baat has touched crores of people in this country. Radio, a mass medium, was on taters during the Congress regime, but now, things have changed. PM Modi’s appeal, once of buying khadi, led to its sudden increase of sales by over 120 per cent.”

Dilip Paul went on saying, “Narendra Modi speaks on all topics that we can connect with, for which, his maan ki baat is very popular. His interactive session has received a warm response whosoever has turned up here today. His mass appeal would definitely help us in the forthcoming panchayat elections.”

Not to miss out on that, the chief organizer of the program, Dilip Kumar Paul, extensively campaigned for his panchayat candidates as well as his party, out at this venue. His summing up by saying, “Our respective governments both at the State as well as the Centre are keen on passing the Citizens (Amendment) Bill, 2016, but, in order to achieve that, we have to make our candidates win, handsomely.”