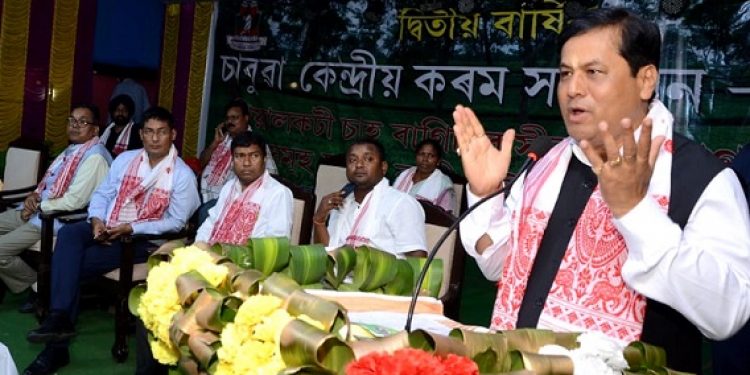 Assam Chief Minister Sarbananda Sonowal on Sunday urged the people of the State to emulate the work culture of the tea garden community who are known for their hard work and discipline.

Assam Chief Minister Sonowal made this call while taking part at the open session of Chabua Central Karam Sanmilan at Sialkati Tea Estate, Chabua in Dibrugarh district on Sunday.

Chief Minister Sonowal while lavishing high praise on the work culture of the tea garden community said that the tea garden people are an integral part of the Assamese community and they play a significant role in the economy of the State.

He also praised the efforts of the community to keep alive their rich traditional life and various cultures. Sonowal further urged the Assam Tea Tribes Students Union to take steps to promote the cultures of the community amongst the people of the state.

He further said that the Government of Assam, following the principle of Prime Minister Narendra Modi’s Sabka Sath, Sabka Vikas is working resolutely to ensure equal development of all big and small communities of the state.

Sonowal in his speech also expressed gratitude to the tea garden community for extending exemplary cooperation towards the government in the aftermath of demonetization announced by PM Modi in 2017 by opening around 8 lakh bank accounts for financial transactions.

Moreover, Sonowal also highlighted schemes such as Rs. 12,000 financial assistance to tea garden pregnant women, Smart phone to line sardars, scheme for repairing roads of tea gardens, introduction of MMU service and central government schemes like Ujjala, Jan-Dhan etc. which has been implemented to provide maximum benefit to the tea garden people of the state.

President of Assam Chah Mazdoor Sangha and former Union Minister Pawan Singh Ghatowar while delivering speech on the occasion appreciated Chief Minister Sarbananda Sonowal’s initiatives for ensuring equal development of all communities of the state and improved law and order situation in the state.

Lakhimpur MP Pradan Baruah and Chabua MLA Binod Hazarika also spoke on the occasion.
Coinciding the programme Chief Minister Sonowal felicitated Buthrai Madri and Rupali Pahari who were adjudged best tea plucker of Sialkati Tea Estate for the year 2017-18. A souvenir was also released to mark the celebration. The open session was prised over by President of Celebration committee Ponakon Baruah.