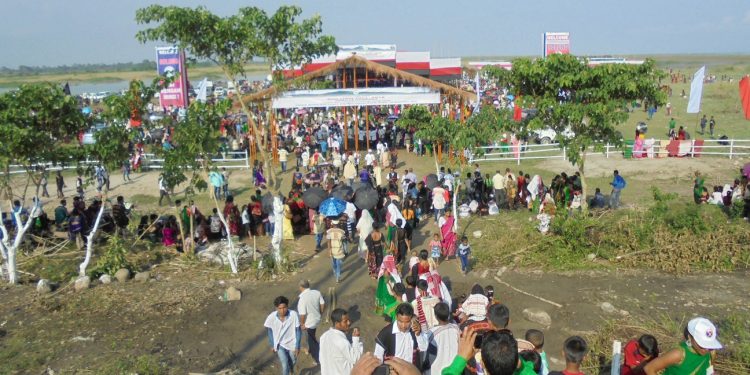 The bank of mighty Brahmaputra has became the hub for both Adis and Mishings as people of both communities assembled in the day-long cultural exchange programme and resolved to foster their age-old unity and integrity.

The community leaders, who have participated the programme recalled their genealogical relationships and how long they have been together, their culture and the language which is most similar to each other.

Discussing on Solung mythology and evolution of Adi-Mising civilization, AMBK general secretary Okom Yosung said that the myths and traditional ethos pertaining to agriculture based festivals like Solung is common among the tribals belongs to Tani group.

Speaking on the occasion, Lakhimpur Lok Sobha MP Pradan Baruah laid stress on the conservation of the traditional customs for showing their ethnic identity before the Indian communities.

He requested the people of both neighbouring states for maintaining closer-coordination in case of any unfavourable situation.

This was fourth edition of Central Solung festival organized in Assam by the joint aegis of the Adi and Mising organizations.

The main agriculture festival of Adi tribe of Arunachal Pradesh usually celebrated within the first week of September. But, the special festive event is celebrated by the community to showcase their rich traditional culture before other ethnic communities.

The Adis of Arunachal Pradesh and the Misings living in Assam have been jointly celebrating the festival to strengthen their relation as both communities have same traditional practices and language similarities.

The traditional behaviours and mythological belief of the Adi and Mising communities are manifested in the folk dances, songs and festival celebrations, which symbolize the spirit of their origin & evolutions and development of civilization.

According to ethnologists, both the communities belong to the same Indo-Chinese family and are of Mongoloid origin. The tribes, who earlier lived together in present Arunachal Pradesh, were divided into two different communities after bifurcation of Assam and Arunachal Pradesh during 1972.

The Solung festival comprises three parts – Sopi-Yekpi, the first part is the sacrificial day; Binnayat, the second part is a ritual offering to the goddess of crops i. e. Kine Nane; and Ekop/Taktor, the third part is the ritual for protection against harm by the evil spirits.

Display of folk dances, community feast and exhibition of food items and traditional attires were some special attraction of the day-long festive occasion.