It will be India’s longest rail-cum-road bridge 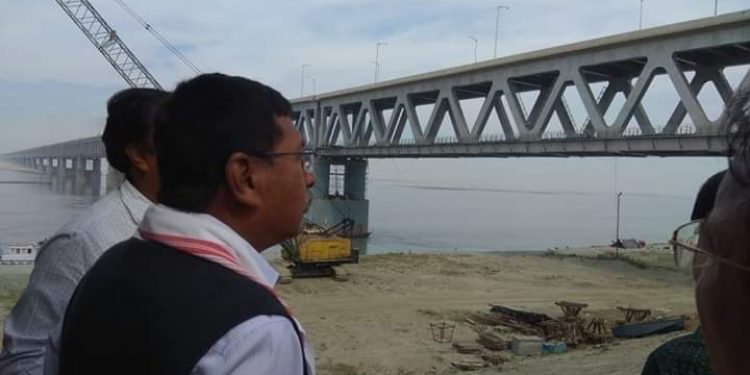 The minister arrived at the south bank (Dibrugarh side) of the bridge at around 9 am and spent nearly an hour at the site. Gohain revealed that 98 per cent of the work on the Bogibeel bridge had already been completed and only some minor work remains to be done which will be over by November.

Measuring 4.94-km, the Bogibeel bridge connecting Dibrugarh and Dhemaji is India’s longest rail-cum-road bridge. The bridge is partly modelled on the famous Oresund bridge that links Sweden and Denmark.

Already in its 17th year, the construction work of the Bogibeel bridge was inaugurated by former PM Atal Bihari Vajpayee on April 21, 2002. The foundation stone of the bridge was laid even earlier by ex-PM HD Deve Gowda on January 22, 1997. Due to revised deadlines, the project cost had already shot up from the initial Rs 1,767 crore to Rs 5,800 crore.

Described as an engineering marvel, a record 70,000 MT of steel has used in the Bogibeel bridge which is said to be equivalent to ten Eiffel Towers.

The total length of welding carried out is approximately 12,800 km which is equivalent to circling 1.5 times around the moon.

The bridge is set up 32 metres above the bed level of the Brahmaputra. The double-decked bridge features two railway lines on the lower deck and a 3-lane road on the upper deck flanked by footpaths on each side.

The mega bridge apart from playing a strategic role in defence of the country’s eastern borders, is expected to fast track the region’s economy.