BJP MLA Shiladitya Dev's statement against the freedom fighters is an insult for every Indian and the Bengali community: Ardhendu Dey 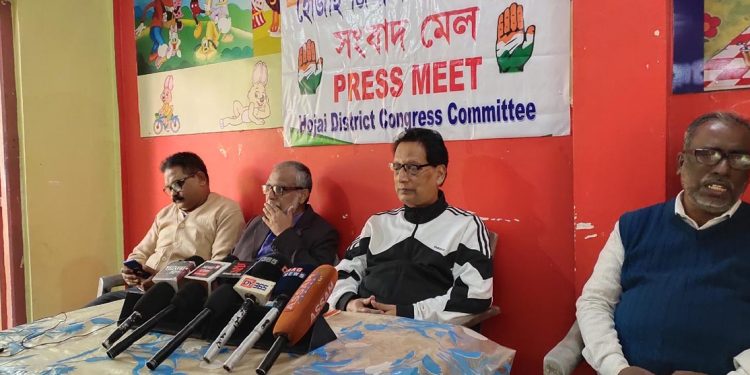 Ardhendu Kumar Dey along with his party members addressing a press conference at Hojai on Wednesday. Image credit - Northeast Now

Dey, who is also the Hojai District Congress Committee president, addressing a press conference at Hojai on Wednesday, said, “I condemn the statement of Hojai legislator Shiladitya Dev at Barpeta on January 25 where he termed freedom fighter Netaji Subhas Chandra Bose as the world’s biggest terrorist.”

Congress leader Dey said the BJP MLA’s statement against the freedom fighters is an insult for every Indian and the Bengali community.

He also played a video in which MLA Dev is heard terming Netaji Subhas Chandra Bose as the world’s biggest terrorist. “Why did he spoke such words? Who gave him the authority to disrespect the legends of our freedom struggle?” Dey questioned.

“During the British colonial rule, Netaji exhorted before every Indian ‘Give me blood, I will give you freedom’. Such a legendary figure he was and terming him as the world’s biggest terrorist by a BJP MLA is shameful, who also belongs to the same community.”

“I believe even Shiladitya Dev’s relatives will not accept such statements against iconic freedom fighters,” Dey added.

Dey said, “Bipin Chandra Pal was an Indian nationalist, writer, orator, social reformer and Indian independence movement activist, thousands of public used to gather to listen to his speeches. He was always in favour of the non-violent movement.”

He said, “Ekbar biday de Ma ghure ashi… is a song on the youngest martyr of the Indian Independence Movement, Khudiram Bose. Whenever this is sung, it brings tears in our eyes and words like terrorists against such freedom fighters by Dev, who is an educated MLA, are painful for us.”

“Today, we are feeling ashamed of MLA Shiladitya Dev,” Dey said adding that it is disappointing for the public who gathered in the function and clapped without understanding what their chief guest was speaking.

Dey further slammed Dev for creating disharmony in the society by his communal statements.

He said, “On many occasions, he targeted the Muslim community. But now he has even not left freedom fighters, Bengali Hindus and because of his activities, the top BJP leaders fear to make him a minister.”

The former Assam minister requested every Indian to vehemently protest against such comments and question BJP MLA Shiladitya Dev who gave him authority to disrespect great freedom fighters of the nation.

He also said if the BJP really respects the freedom fighters, then the party should take stern action against the Hojai legislator.

Despite repeated attempts, Northeast Now could not contact MLA Shiladitya Dev for his comments.