Our nationwide demonstration against NRC will begin from November: Hojai MLA 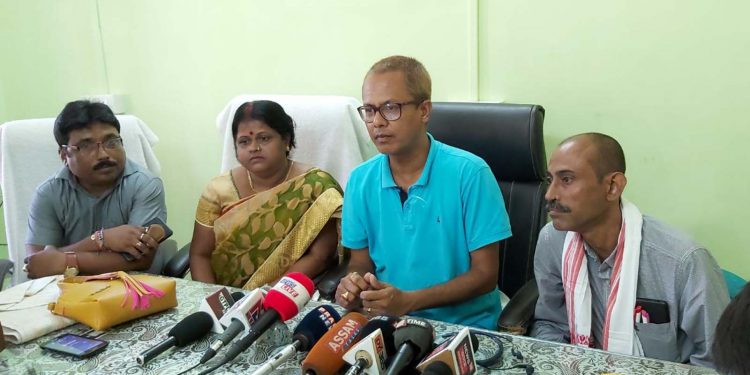 Hojai MLA Shiladitya Dev on Sunday asserted that marking of ‘doubtful’ (D) voters in Assam’s electoral rolls should be stopped with immediate effect.

MLA Shiladitya Dev made this demand while addressing a press conference after attending a workshop related to ‘doubtful’ voters at Hojai Municipal Board office on Sunday.

The MLA questioned, “How can anyone insult an Indian citizen by marking ‘D’?”

He said he would soon file a petition with the Election Commission of India regarding the ‘D’ voter issue.

Dev further alleged, “The Election Commission of India has not the authority to determine the status of people whether they are Indian citizens or not. For this, there are Foreigners’ Tribunals.”

“In the year 1997, this ‘D’ voter culture was started by the Election Commission,” said Dev.

“If the Election Commission of India is the authority to decide who is foreigner or Indian and accordingly mark ‘D’ in electoral rolls then NRC must be prepared based on 1997 voters’ list, which is correct as per ECI,” said Dev.

He added, “If the number of foreigners has increased by 100 times compared to the 1997 voter’s list then the ECI has done a big mistake,” MLA Dev added.

Dev also said, “We will set an example in Hojai by providing legal help to the D-voters to fight in Foreigners’ Tribunals.”

Without taking anyone’s name Dev said, “If anyone thinks before his retirement NRC must be completed, let them do whatever they desire, but there is ample scope to correct the NRC in future.”

“Our nationwide demonstration against NRC will begin from November 2019,” Dev informed.

He once again claimed that the final NRC, which is going to be published on August 31, 2019 will be completely a faulty one.

He said Congress is fully responsible for NRC’s ‘one-man show’.

“Our mission is a Bangladeshi free Assam and for this our fight will continue,” Shiladitya Dev asserted.

Addressing the press conference Alok Deb, advocate, Gauhati High Court said, “It is unfortunate that financially weaker section and especially illiterate people are being targeted by the government machinery and are harassed in the name of ‘D’ voter.”

“Our mission is to provide legal help to the victims who are deprived of their judicial rights due to financial crisis and knowledge,” Alok Deb added.

A three-hour workshop was organised in Hojai Municipal Board in connection with the banner Doubtful (D) Voters (an insult to citizens), legal advice to citizens.