German couple Tina and Uwe Griesbach already travelled across 150 countries for over 6,20,000 kms since 2007 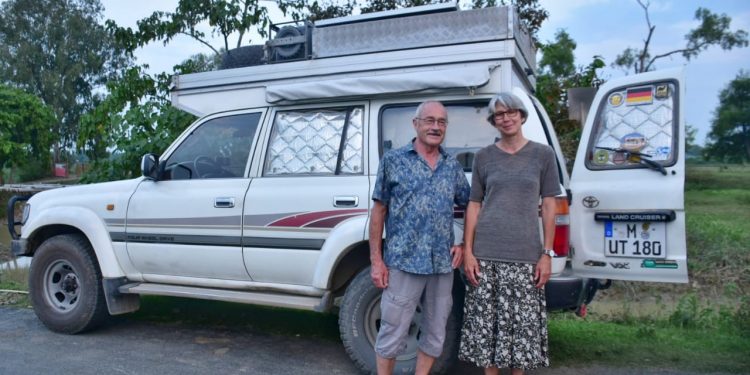 A retired German couple was mesmerized by the cultural heritage of eastern Assam’s Sivasagar when they visited the place on Sunday in an impromptu stopover.

The septuagenarian wanderer couple, but young at heart with full of zeal, is on a tour across the globe on wheels over the last more than one decade.

During an exclusive rendezvous with Northeast Now in Sivasagar on Sunday, Tina and Uwe Griesbach revealed they have already covered over 150 countries driving across myriad terrains for over 6,20,000 kms since 2007-08.

Uwe Griesbach was a civil engineer posted in Saudi Arabia where he bought his Toyota Land Cruiser some 25 years back.

Later when the couple embarked on their world tour, they modified the vehicle to their requirement which is now also solar powered.

The vehicle is equipped with a folding roof top bed and other basic amenities like a refrigerator, a water purifier, a sink, a food processor among other things.

The vehicle has been their constant companion across the globe in all kinds of terrains.

Sivasagar was in fact not in their itinerary in this year’s visit to Assam.

They were in Majuli and enjoying the traditional Raas festival when they came across information about the history and culture of Sivasagar.

Fascinated by what may be in store they decided to drive down to Sivasagar only to return spellbound.

In their opinion they were simply bowled over by the rich cultural heritage of the place which was once the proud capital of the erstwhile Ahom kingdom.

Earlier they visited several places in Meghalaya before coming to Assam.

Tina especially spoke about the monoliths there which according to her was a marvel and unique to the place.

Their impression about the archaeological sites of the Ahom regime in Sivasagar was evident in their glittering eyes.

Tina particularly mentioned about the magnificence of the Shiva Dol and Vishnu Dol which she found ‘very impressive’.

Uwe Griesbach especially praised the hospitality offered to them by the officials in particular and the common people in general.

“Everything here is well managed and very tourist friendly,” he opined.

‘Particularly the presence and maintenance of clean toilets’ was what also impressed Griesbach, which he admitted was missing at many places across the country.

Later in the evening, during an informal sitting with Sivasagar deputy commissioner Dr M S Lakshmi Priya and couple of other officials, Tina and Uwe Griesbach offered several suggestions to promote tourism.

They requested the district administration to share information about various developments in the tourism sector from time to time which they would upload in their website.

They suggested that cultural projects can be taken up on a larger platform to increase visibility among global tourists.

They also suggested sharing information through travel magazines and sensitizing tour operators in order to rope in more domestic and foreign tourists.

They also assured they would strongly recommend other tourists across the globe to visit Sivasagar and get blessed by the rich cultural heritage of the place that speaks volumes of a glorious by-gone era.

They lauded the initiative ‘Soulful Sivasagar’ launched recently by the district administration under the able stewardship of the deputy commissioner.

The German couple also requested the deputy commissioner to take special measures to ensure that the archaeological monuments are preserved for posterity.

The deputy commissioner also shared her ambitious plans to work for promoting tourism of the district.

From Tezpur they will drive up to Tawang in Arunachal Pradesh and enter Bhutan as their next destination country on December 2 next.