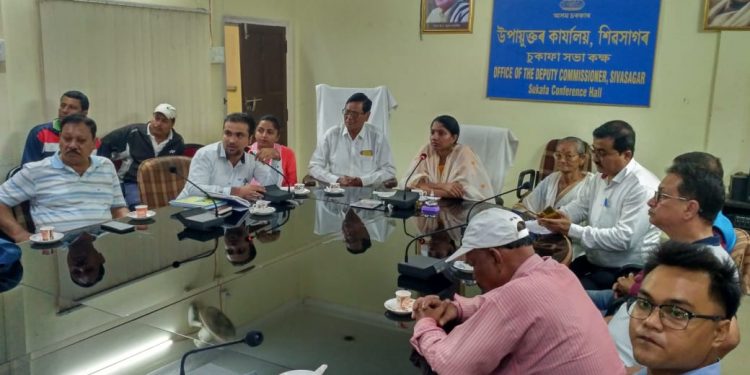 In order to give a major boost to the sports scenario of Sivasagar district, the deputy commissioner Dr M S Lakshmi Priya has taken up an ambitious project christened ‘Khelo Sivasagar Khelo’.

With a view to uplift the sports culture of the district, the Dr M S Lakshmi Priya held a meeting recently at the Sukafa conference hall of the Deputy Commissioner’s office.

The meeting was attended by office-bearers of various sports organizations, sports organizers, host of veteran and rising sports persons of the district and sports lovers.

Speaking at the meeting, the deputy commissioner said various sports events will be be held at school, education block and at the district levels with an aim to professionally groom and systematically select players from the district to compete at the national level.

The deputy commissioner was of the opinion that through this event, the sports persons of the district can showcase their talent and be prepared for the next level of competition.

The deputy Commissioner desired constructive suggestions and full cooperation from those present at the meeting.

The district sports officer Sanjoy Upadhyaya through a power-point presentation detailed about the preliminary preparations lined up for ‘Khelo Sivasagar Khelo’.

He also asked for suggestions and cooperation from all those present in the meeting.

Notably, the competitions will be held under the overall supervision of the deputy commissioner and under the aegis of the District Sports Office, inspector of schools and in collaboration with the district sports associations of Sivasagar and Nazira.

The competitions will be held from last week of January to the middle of February next year.

The competitions will be held in three categories for both boys and girls – under 14 years, under 17 years and under 19 years.

The meeting also discussed at length about the selection of play fields, indoor halls and availability of sports items at schools along with construction of block level and district level committees.

The meeting also decided to have a total of 32 categories of sporting events.

The deputy commissioner assured those present that the administration will take all possible measures to elevate the sports scenario in the district by addressing the shortcomings.

Speaking at the meeting, Arjuna awardee Bhogeswar Baruah lauded the initiatives taken by the district administration and opined that the ‘Khelo Sivasagar Khelo’, which is first of its kind in the State.

He also said it will usher in a ray of hope for the sports persons of the district.