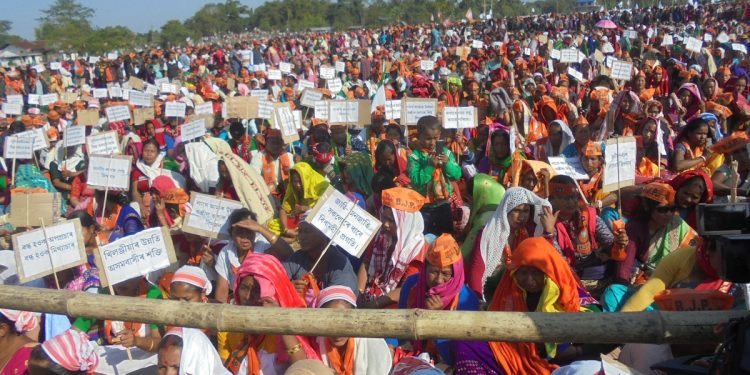 On the next day after Asom Jatiyatabadi Yuva Chatra Parishad (AJYCP) organized ‘mass rally’ at Jonai, ruling BJP and its allies conducted ‘unity rally’ at Dhemaji in north Assam on Wednesday.

Speaking about ongoing movement against Citizenship Amendment Act (CAA)-2019, Sonowal alleged that opposition Congress and leaders of protesting organizations are misleading the people about the Act and affirmed that the new citizenship Act would not hamper indigenous people of the State.

“We were trying to prepare/update a correct and immigrant-free National Register of Citizens (NRC) for Assam. But the process was derailed by some influential organizations, which is known to you all”, Sonowal slammed the protesting organizations without taking name of any organization.

The chief minister in course of speech said his government was granting land pattas to sons of the soil thereby working to protect land right of the indigenous people.

“I am one of the indigenous tribal of this land so that I can never act against interest of my motherland at any cost,” he said.

“The protesters are creating a wrong emotion among the people by misleading them over CAA,” he alleged.

“The emotion is like fire on paper, which does not take enough time to douse,” Sonowal said while asking the people to stay without fear during BPJ’s rule.

State finance and PWD minister Dr Himanta Biswa Sarma, who addressed the gathering, said Bangladeshi nationals intruded into Assam during Congress rule and assured no more Bangladeshis would enter the State through the new citizenship Act.

“The Congress was contemplating illegal entry of foreign nationals, which has compelled the BJP to enforce such a citizenship act to seal the entry,” he said.