Youths must not be misled to join agitations, says Sarbananda Sonowal 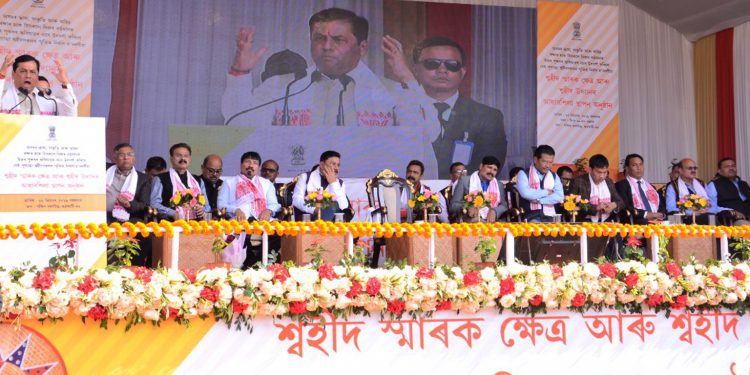 “Our land is fertile, language is strong, culture is robust and therefore, we should not lag behind in development,” said Assam Chief Minister Sarbananda Sonowal on Tuesday.

“In order to put Assam strongly in world map, we all must work dedicatedly,” Sonowal added.

He was addressing a gathering after laying the foundation stone of Swahid Smarak Kshetra and Swahid Udyan at
Paschim Boragaon in Guwahati.

The Swahid Smarak Kshetra and Swahid Udyan would be built in the memory of martyrs of Assam Agitation.

The entire project would be set up at a land area covering more than 98 bighas.

“Building a robust work culture in the state should be the prime objective of everyone and youths must not be misled to join agitations,” he added.

Speaking further Sonowal stated that the Smarak Kshetra and Swahid Udyan would inspire the future generations of the state to dedicatedly work for the development of Assam.

“As Assam is going through one of the prolonged phases of peace and development, no one should allow divisive forces to destabilize the state,” he added.

The CM further said that Assam had a rich history of bravery and heroism against outside aggressors.

“Assamese people had never bowed before any challenge,” the CM said.

He further urged the people to take inspiration from the history and endeavour to make the state developed in all sectors like science, technology, agriculture, literature, culture etc.

He also urged different organizations not to spread misinformation regarding Citizenship Amendment Bill (CAB) to create panic among the masses.

He called them to join hands with the government to make the state developed.

“The present State government would not do not anything to jeopardise the identity of the Assamese race,” he said.

“Every section of society should work to bring a positive change through hard work and dedication,” Sonowal reiterated.