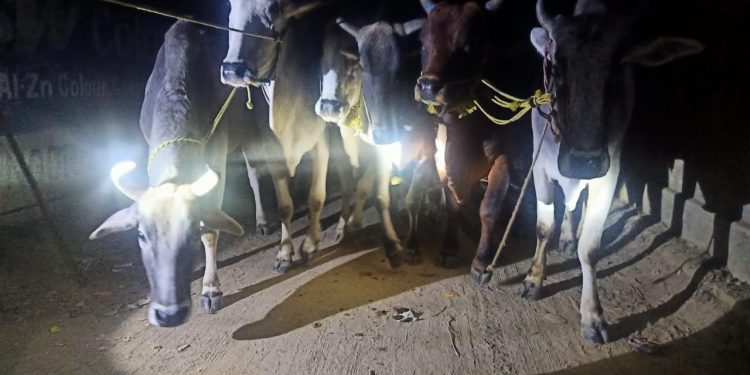 The police have shot in the air to foil attempts of cattle smuggling through the river route at Birsing char and Dharmasala areas along the Indo-Bangla international border in Assam’s Dhubri district.

Dhubri superintendent of police Abhijit Gaurav said, “The first incident took place at Birshing Char (sandbar), while the second incident took place when cattle smugglers were on their way to the neighboring country through the river route on Tuesday night.

Separate police teams swung into action and chased the smugglers’ boats carrying cattle in both areas, signaling them to stop.

When they tried to flee, the police first opened fire with rubber bullets and later with real bullets.

“The police personnel were forced to fire about nine rounds in the air at Birsing char and two rounds at Dharmasala in a bid to prevent the cattle smugglers from fleeing,” said Gaurav.

“They however, managed to escape taking advantage of the darkness,” the police officer further said.

A case has been registered under the relevant sections of the Indian Penal Code and a search is on to nab the cattle smugglers.

Meanwhile, two cattle smugglers were also arrested and four bovines were rescued from Gauripur during a similar drive on Tuesday night, said officials.

Dhubri police had opened six rounds of fire in the air near the Birsing Char area on June 13 and rescued 30 cattle heads from a boat.