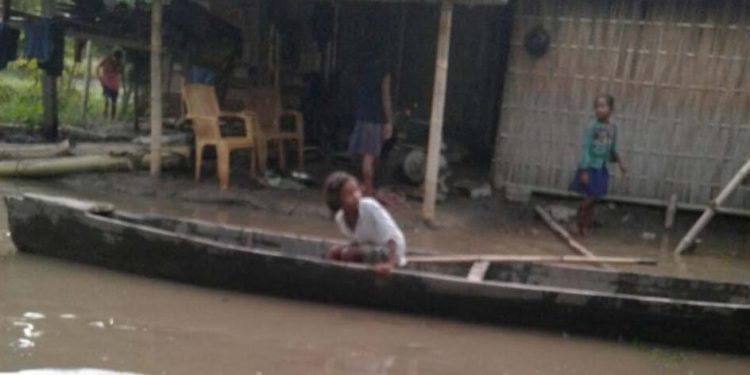 Two sets of of public interest litigation (PILs) have been filed in the Gauhati High Court against the North Eastern Electric Power Corporation (NEEPCO) blaming it for the flash floods that occurred in Golaghat district in the month of July and August.
One PIL has been filed by Prasanta Kumar Dutta of Golaghat while another PIL has been filed by Bobrubahan Saikia, the son of Khumtai’s BJP legislator Mrinal Saikia and both the petitions have been registered as PIL No 58/18 and 60/18 respectively.
Also read: Assam: Top NEEPCO official served notice to appear at Golaghat PS
Dutta, who was a drilling engineer and had worked with Oil India Limited, raises environmental and ecological issues in view of certain actions undertaken by Doyang Hydro Electric Power Plant (DHEP) in his PIL.
It was pleaded that the reservoir of the DHEP was not properly maintained for a long period of time, resulting in reduction of capacity of the reservoir.
Also read: Flood in Assam’s Golaghat: Khumtai MLA Mrinal Saikia files case against NEEPCO
NEEPCO adopted an ingenious method to clear up debris, silt, sand and sediments, accumulated in the reservoir over the years, by allowing water level to reach the height beyond 324 meter level leaving no room to
retain additional inflow of the water to the reservoir and then, as the water level rose from July 27 to August 8, by opening all the four radial gates, for a consecutive period of ten days, engineering a flash flood with high water current, which carried accumulated debris, sand, etc.
In the process, 116 villages were submerged and sand and silt, etc. came to be deposited on the soil, Dutta pleaded in his PIL.
According to Dutta, during peak monsoon season, the water at the reservoir ought to have been maintained at 310 metre to 315 metre.
“The sheer carelessness and casual attitude of the NEEPCO has caused the people of Golaghat district to suffer the wrath of the flash flood. Therefore, I have filed the PIL seeking adequate compensation from NEEPCO for the flood affected people,” Saikia said.
Saikia also lambasted NEEPCO for allegedly releasing water from its DHEP situated at Wokha district of Nagaland without giving prior warning to the Golaghat district administration.
NEEPCO has failed to minimize property damage and risk to human life.
The flooding has upended life for the people here. The Doyang Hydro Electric Project sent a torrent of water charging across paddy fields and through villages rendering thousands of people homeless. Thousands of people have suffered a huge loss, whether in properties or agriculture, Saikia alleged.
As more or less an identical issue was raised in both the petitions, the High Court has decided to list both the petitions together and will hear both the matters on November 14.
Meanwhile, notices have been issued to NEEPCO and Chief Secretary to the Government of Assam,   Commissioner and Secretary to the Government of Assam, Revenue & Disaster Management Department,  Commissioner and Secretary to the Government of Assam, Forest Department, Deputy Commissioner of Golaghat and Disaster Management Authority of Golaghat, who were also been mentioned as respondents in these PILs.
It is to be noted that  the NEEPCO-run Doyang Hydro Electric Project had released excess water from its dam on July 27 causing sudden rise in the water levels of the Dhansiri and Doyang rivers and floods in the adjoining river bank areas.
Thirteen villages under Khumtai revenue circle, twelve villages each of Sarupathar revenue circle, Merapani subdivision and Golaghat revenue circle besides seventeen villages under Morongi revenue circle, eighteen villages under Bokakhat revenue circle and seven villages in the border area of Uriamghat (Sector B) have been inundated by flood water affecting 2185.64 hectares of crop land and a population of 54,135.
The floods have claimed the lives of Kiran Rai of Barpathar, Birendra Kisku of Uriamghat and Khogeswar Gowala of Bokakhat.