In the website, the information has been uploaded both in English and Assamese 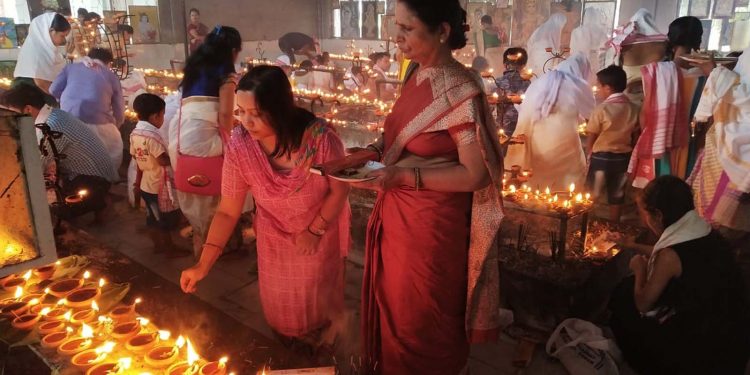 After the runaway success of the Mukto Akakh App among students, Noshad Ahmed has this time created a website – www.dhekiakhowabornamghar.com – on the historic Dhekiakhowa Bornaamghar in Jorhat.

Noshad said the Dhekiakhowa Bornaamghar associated with Mahapurush Madhabdeva, one of the greatest disciples of 16th century social and religious reformer Srimanta Shankardev, is a holy place for the Hindus and those who follow the Ek Xaran Naam Dharma, a neo-Vaishnavite faith.

A naamghar itself means a socio-religious place of worship.

“Although people throng the place during the Bhaada month of the Saka calendar, very few people know how to reach it and more importantly about its significance,” Noshad said.

The information has been uploaded both in English and Assamese and the website is replete with interesting snippets of information.

Through the website, one comes to know how the naamghar gets its name Dhekiakhowa from Dhekia, the name of a fern relished in the Northeast, and khowa meaning to eat.

This was the humble repast served to Madhavdeva by an old couple in whose house Madhavdeva had taken shelter for the night.

There is also a lamp supposed to be lit by Madhavdeva in 1528 at the spot and is believed to have been kept burning for 491 years since then.

The website also contains two writings of Madhabdeva in Assamese – the Ratnawali and Naam Ghoxa.

A picture gallery contains photos of the naamghar and its surroundings.

Apart from the interesting tidbits, there are also details about how the naamghar, which is 15 km to the east of Jorhat town and 3.5 km from NH 37,  can be reached, what festivals are celebrated and which are the two holy months in which the footfall of devotees is more.

A resident of Kakojan, Noshad Ahmed owns a software firm – 9sd World – at Jorhat and the website has been donated by the company.

“I would like to say that for content related to public welfare or places of public worship, we create free websites. For more information in this regard, we can be contacted at www.9sdworld.com or call at 7013339384/8790372712,” he said.

He is indebted to Prabin Kalita and Diganta Saikia, president and secretary respectively of Dhekiakhowa Bornaamghar managing committee for their help.

Noshad’s earlier app Mukto Akakh, which contains backdated question papers of several important examinations held in the region for the benefit of students, was created when he himself was a student.