Krishna, the rogue elephant, which had unleashed a reign of terror in the jungles of Assam’s Goalpara, died of cardiac arrest.

The rogue elephant, named “Laden” was tranquilized and trapped on Monday at Rongjuli, and later transported to Orang National Park.

A team of experienced veterinarians, led by Dr. Kushal Konwar  Sarma, professor and dead, Department of Surgery and Radiology, College of Veterinary Science, conducted post-mortem examination of the dead elephant.

Although the forest officials are waiting for the detailed autopsy report, preliminary findings indicate cardiac arrest as the cause of death of the elephant.

A statement issued by the Assam Forest department on Sunday and claimed that the preliminary findings indicate that cardiac arrest was the cause of death of the elephant. 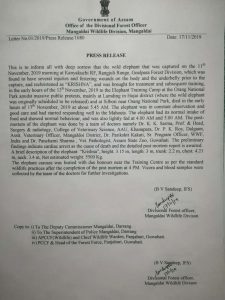 The death of rogue elephant Krishna in Orang National Park drew severe criticism on adherence of the standard operating procedures (SoP) while tranquilizing the elephant.

“The elephant was in constant observation and good care and had started responding well to the Mahouts. The elephant had its normal intake of food and showed normal behaviour, and was also lightly fed at 4.00 AM and 5.00 AM,” it stated.

The team of veterinarians found that the tranquilized elephants had several injuries and festering wounds on the body and the underbelly.

The elephant carcass was buried at around 4 pm with due honours near the Training Centre as per the standard wildlife practices after the completion of the post-mortem examination.