Laden is dead – and who is responsible?

Generally, tranquilizing drugs used for elephants are respiratory depressants, and can cause hypotension (low BP) and bradycardia (slow heart beat), and can be fatal 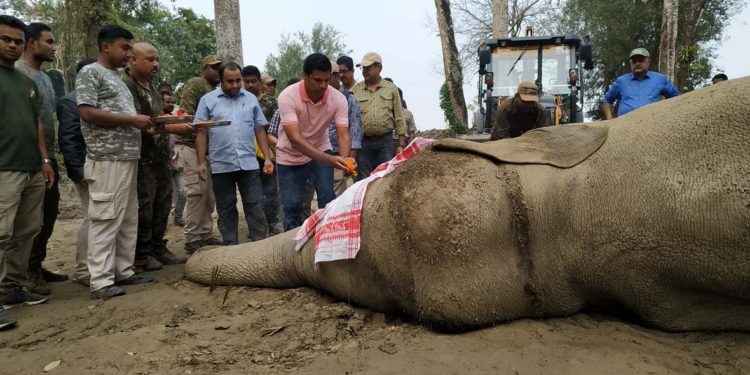 Laden is dead. And, who is now to be blamed for the death of the elephant?

The 35-year-old elephant was tranquilized on Tuesday at Rongjuli forest division in Goalpara district, and was later shifted to Rowmari camp of Orang National Park.

A lot of videos have gone viral on social media platforms, showing Laden, after being tranquilized, being assaulted and tortured in presence of hundreds of people.

Dr. Bijoy Gogoi, the veterinarian of Assam State Zoo, who was accompanying the team, could not approach the tranquilized elephant for follow-up actions because of the hostile situation on ground.

Generally, tranquilizing drugs used for elephants are respiratory depressants, and can cause hypotension (low blood pressure) and bradycardia (slow heart beat), and can be fatal.

Immediate veterinary care is required for tranquilized elephants because in hypo-tension and bradycardia is followed by Ataxia (lack of voluntary muscle movements and eye movements).

Veterinarians need to follow a strict standard operating procedure (SOP) after an elephant is tranquilized.

Atropine is administered intravenously at a regular interval to maintain an optimum heart beat.

Similarly, Fludrocortisone is a medication to handle the sudden hypotension of the elephant. It works by promoting Sodium retention by the kidney, which is necessary to improve blood pressure.

But when there is Sodium retention, there is huge loss of Potassium. So it is important to get enough Potassium.

And, because of the hard work of Dr. Bijoy Gogoi, the rogue elephant ultimately reached Orang, and survived for six days.

To add to that, the tranquilized elephant was forced to attend sessions of the torturous “Kraal” training module.

Wildlife experts were of the opinion that it was a total wrong decision to follow “Kraal” training module for the tranquilized animal.

Generally, elephants between the age of six and seven are trained. But the elephant caught from Rongjuli was 35 years old, and was over seven feet in height.

The ‘Kraal’ module of training is extremely torturous, basically aimed to break the spirit of the rogue elephant, and to ensure that it accepts the commands of the trainers or its masters.

In “Kraal” training module, the elephants are trapped in a strong wooden barricade and tied with ropes.

The training method also required to starve the elephant.

The tranquilized elephant was already dehydrated, and was facing massive electrolytic imbalance.

And starving the elephant at this stage was definitely a tragic plan.

Were SOPs followed in this operation? The elephant, said to have killed 5 people in Assam’s Goalpara was sedated, and later taken away. It’s good to know it is stable now, but the whole exercise seemed to be a source of public entertainment. I hope the punishment isn’t harsher. pic.twitter.com/1LtETSSdxW