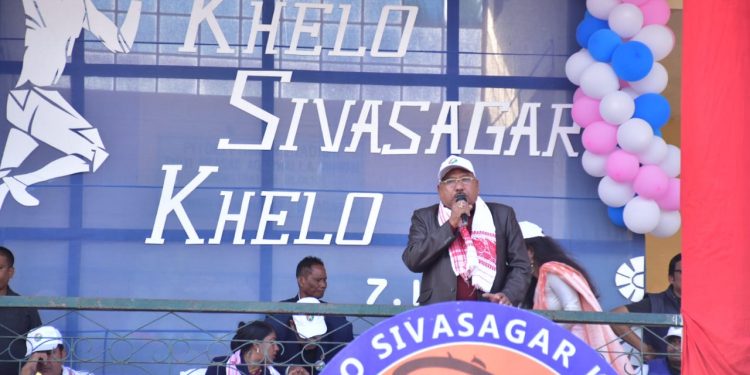 With this ‘Khelo Sivasagar Khelo’, the district endeavours to hone young talents and give them a launching pad to shine at state, national and international levels.

The closing function was held at the Piyoli Phukan stadium in Sivasagar with a day-long programme.

Speaking on the occasion, the minister lauded the efforts of the deputy commissioner in promoting and popularizing sports in the district.

The minister also envisaged that ‘Khelo Sivasagar Khelo’ will usher in a new dawn in the sporting arena of the district.

He also lauded the efforts put in by the guardians, teachers and the general public to make the event a grand success.

He exuded confidence that similar support and cooperation will be extended in similar endeavours in the future.

He said the tradition initiated through this sports event should continue in the days to come to encourage the young and aspiring sporting talents of the district.

He said sports also sharpen physical, mental and alertness of young ones thereby making them energetic and more alert and disciplined.

He further assured that all possible assistance will be extended from the State Government towards promoting sports in the district.

Speaking on the occasion, the legislator from Thowra, Kushal Dowari appreciated the exemplary initiative taken by the deputy commissioner and the district administration in organizing this sports event.

He also said, such sports events go a long way in inspiring the young and budding sporting talents.

He also said that sports not only help to maintain good health, but also provide a platform for the aspiring sports persons to achieve further in bigger arena.

Speaking on the occasion, president of Assam Cricket Association Ramen Dutta disclosed that the Association is contemplating to develop at least 10 playgrounds across the State.

He said, for this at least 30 bighas of land is required.

In this regard, he urged the district sports associations to do the needful.

While expressing satisfaction at the successful completion of ‘Khelo Sivasagar Khelo’, the deputy commissioner Dr M S Lakshmi Priya said the prowess shown by the young sports persons definitely gave a strong signal that they have the talent to shine at bigger levels.

Dr M S Lakshmi Priya exuded confidence that the district has the potential to produce Olympians in the future.

The deputy commissioner also expressed contentment at the overwhelming participation in all the 24 nationally recognized disciplines.

Notably, an expert selectors’ team from the Sports Authority of India (SAI) is scheduled to visit the district on February 15 next to select the best of young sporting talents for a training programme.

The deputy commissioner also disclosed that two sports persons from the district will get the opportunity for an exposure visit to Thailand shortly.

Earlier, the closing ceremony was kicked off by flag hoisting by the Deputy Commissioner followed by an impressive march past by the participants and a band platoon.

As part of the closing function, the finals of the Under-17 boys and girls football matches and the final 100 metres race were held amid cheers of the sizeable spectators.

Prizes were distributed among all the winners in various disciplines held under ‘Khelo Sivasagar Khelo’.