A Jorhat village with no doctor, no health centre with starved childhood…

These are facts and the reality of a "developed Assam", which have been revealed in a survey carried out by a group of 12 PhD scholars of NEIST 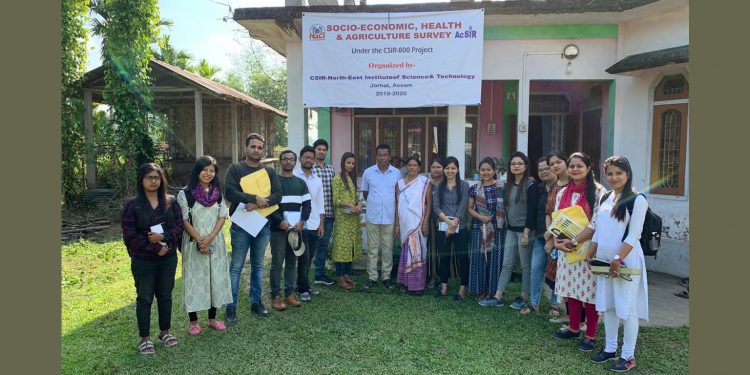 A PhD scholar team of CSIR-NEIST whose survey revealed that a Jorhat village has no doctors or a health care centre. Image: Northeast Now

Under the gloomy sky over a cluster of humble houses, in a village 20 kilometres from Jorhat town, ailing people look up to the ‘Unseen’ for ‘medication’ as the village is without a doctor or any healthcare centre.

Falling sick is an unwanted luxury for the 450 odd people of Holalbari Gohain Gaon in Jorhat district as reaching the nearest health centre is nothing more than a nightmare for the roads are at its “deplorable” best!

The innocent eyes and the modest smiles of the young children are uncertain whether they will ever have healthy lives or if they will ever be able to shun the tag of being called “underweight”.

These are facts and the reality of a “developed Assam”, which have been revealed in a survey carried out by a group of 12 PhD scholars of the North East Institute of Science and Technology (NEIST).

“This was not just an ordinary survey where samples were collected and then tested in the laboratories and then the results were just made available for the people to read and ponder,” said CSIR-NEIST director G Narahari Sastry to Northeast Now.

The scholars’ team was accompanied by two medical staff members from the NEIST while carrying out the survey- a first of its kind in the state.

“This was a first of its kind survey carried out by CSIR-NEIST,” Sastry added.

“The survey was conducted with the intention to understand the requirement of the villagers and see where NEIST can intervene to better their conditions,” he added.

“It was unbiased attempt to understand the socio-economic and health issues of the rural people in order to work for their development,” he added.

The researchers spent three nights in the village which has a population of around 450.

Lisamoni Kalita, Monti Gogoi and Rajiv Goswami- three of scholars among the 12- interacting with Northeast Now informed that the average income per family was between Rs 8000 to Rs 10000.

“Most of them live below the poverty line and are engaged in farming as daily wage labourers. Some has small tea gardens,” said Lisamoni Kalita.

“While alcoholism prevails among the adults, it is not evident among the juveniles,” she added.

“They want medical centres in the village for access to quick medical treatment,” she further said.

“They also want the roads and the transportation system to improve,” she reiterated.

The research scholars who also conducted anthropomorphic tests with the help of the medical staff and they found that most of the adults had high blood pressure and vision problems.

The team also took weight measurements of around 60 school students and found that 45 of them were underweight.

“Most students worked in the morning- either alone or with one of their parents before going to school,” said Monti Gogoi.

“They are even unaware of the subjects that are studied in science, humanities, and the commerce streams,” infomred Rajiv Goswami

“Exposure of the students to the outside world is quite low,” he added.

They were also told about the importance of science in one’s daily life by the 12 PhD scholars.