Assam: Jorhat gets all women market 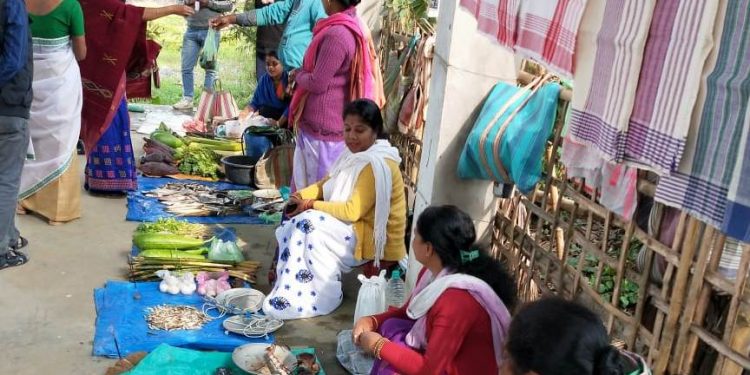 Tesjashwini, an all women market aimed at empowering women at the grassroots level was opened at Kolakhowa Jyotipur in Jorhat.

The weekly market will open only on Sundays and will be manned only by women.

The market is housed in a market shed constructed by Jorhat Zila Parishad under Central funds about 10 years ago.

This has been provided to members of self-help groups of the area covering five Gaon Panchayats under an initiative of the North West Jorhat Development Block (Office at Dhekargorah) under the State Rural Livelihood Mission (SRLM).

All types of produce made, cultivated or reared by SHG members will be sold at the weekly market.

As the market shed was lying unused for so many years the North West Jorhat Development Block approached the Jorhat Zila Parishad to start the weekly market for women vendors to which the latter agreed.

On the first day 50 stalls selling vegetables, fish, chicken, ducks, gamosa,  mekhela sador, bed-sheets, sweets and snacks,  by the women vendors sold out by noon as the rush of customers increased gradually from morning  when the market started.

A minimum fee of Rs 20 has been charged per stall with half of the amount to be paid to Jorhat Zila Parishad and the other half to be deposited to the cluster under which the SHGs operates to be used for maintenance purpose of the market.

It has been proposed to keep the market plastic-free and customers are being asked to bring their own bags or buy paper bags made by women SHG members that will be sold in the market.