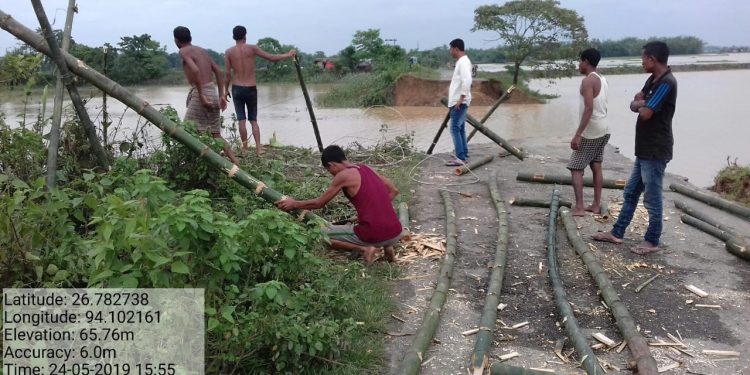 Efforts are on to build a temporary bamboo bridge at the breached site of Dhekorgorah Road in Jorhat. Image - Northeast Now

A total of 2,192 flood affected people from five villages have taken shelter in four relief camps at three schools in Jorhat district.

One relief camp has been set up at a Gaon Panchayat office with an auditorium under the Jorhat West Revenue Circle.

Flood waters of river Bhogdoi have inundated a large area in Jorhat after its embankment breached at three points on Wednesday evening.

However, despite incessant rainfalls in different parts of the district, the water level of river Bhogdoi receded on Friday.

The embankment of river Bhogdoi breached in three areas between Malowpam and Malowkhat areas on Wednesday evening resulting in large-scale flooding of villages on the south western bank of the river.

Gogoi said five villages under Jorhat West Revenue Circle are still reeling under flood waters till Friday affecting a population of around 6,000.

A health camp for animals was conducted on Friday at Malowkhat.

On the other hand, flood waters have inundated four villages under Titabar Revenue Circle affecting 89 people.

Another village under Teok Revenue Circle has been affected by flood on Friday where 340 people have been hit.

Gogoi said, “All the departments concerned are working overtime in the field to support the flood victims and provide relief.”

“Social welfare officials and staff have engaged themselves in taking care of the children in the relief camps,” Gogoi said.

Gogoi also informed that the water level of Bhogdoi in the areas under the Jorhat West Circle was on a receding trend on Friday and is flowing below the danger level.