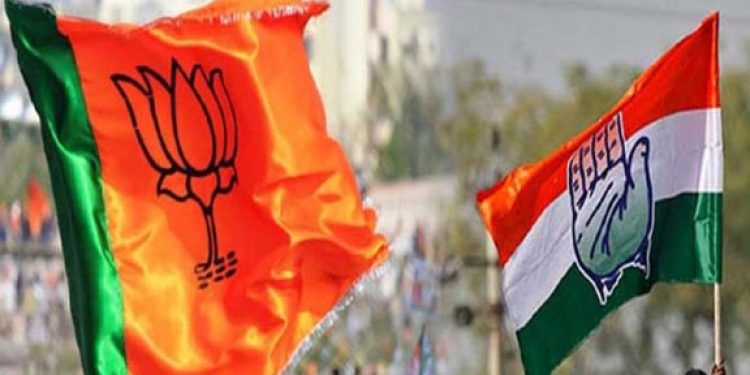 The five parliamentary constituencies of Assam that will go for polling on Thursday in the first phase are all set to witness straight contests between the ruling Bharatiya Janata Party (BJP) and the Congress.

The constituencies are Kaliabor, Tezpur, Jorhat, Dibrugarh and Lakhimpur.

Although there are seven candidates in the fray for the Kaliabor Lok Sabha seat, the constituency is likely to witness a straight battle between sitting MP Gaurav Gogoi of the Congress and Asom Gana Parishad’s (AGP) Moni Madhab Mahanta. The AGP has forged an alliance with the BJP to contest the general elections.

On the other hand, the AGP’s Mahanta had served as vice president of the influential All Assam Students’ Union (AASU) before joining active politics just before the poll process set rolling. He is seen as a popular student leader in the constituency.

For the BJP, winning the Kaliabor seat will mean ending the Gogoi’s dynastic rule in the constituency.

Similarly, the Tezpur constituency is also heading for a straight contest between BJP candidate Pallab Lochan Das, the state’s labour minister, and former bureaucrat MGVK Bhanu fielded by the Congress.

The Tezpur seat used to be a Congress stronghold but that changed with the victory of the AGP’s Joseph Toppo in 2009. In the 2014 polls, BJP’s Ram Prasad Sarmah won against Toppo.

Replacing Sarmah, who hails from the Nepali community in the State, has upset his supporters. But fielding Das, who comes from the tea garden community, is in the interest of the community’s voters in Tezpur, a major deciding factor in the constituency.

Meanwhile, Bhanu is banking on his contribution towards the small tea growers in Assam while he was the chairman of the Tea Board of India and several delopment projects that he singularly undertaken when he was the deputy commissioner of Sonitpur district. Tezpur has a substantial number of small tea growers, who could play a major role in the forthcoming polls.

A 1985 batch IAS officer, Bhanu has made Assam his second home even after his retirement and has been appreciated for his contributions.

The Jorhat constituency also used to be a Congress stronghold with the late MP Bijoy Krishna Handique winning the seat for six consecutive terms since 1991. The seat was won in the 2014 polls by the BJP’s Kamakhya Prasad Tasa.

The BJP has, however, replaced Tasa this time due to a strong anti-incumbency factor working against him in Jorhat and gave the party ticket to the state’s power minister, Topon Gogoi.

According to BJP sources, replacing Tasa was a well planned move to quell the peoples’ opposition to the saffron party over the Citizenship (Amendment) Bill 2016. With a sizable Tai Ahom electorate in the constituency, the BJP believes that the Bill might affect its poll prospects in Jorhat and that a new face might help the party.

The Congress is banking on former legislator Sushanta Borgohain to regain lost ground for the party.

In Dibrugarh, there is a straight battle between the BJP’s sitting MP Rameswar Teli and Congress veteran Paban Singh Ghatowar. Both Teli and Ghatowar hail from the tea community.

Congress’ Anil Borgohain will fight it out with sitting BJP MP Pradan Baruah in Lakhimpur.

Baruah contested the by-polls and won the seat in November 2016 after Sonowal vacated it to become the state’s chief minister.