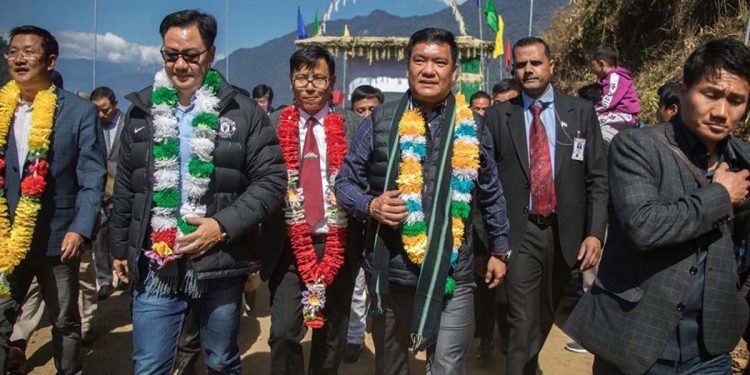 Arunachal Pradesh chief minister Pema Khandu on Thursday said an all-party meeting will be held in the state soon to decide whether the upcoming panchayat polls should be fought on a non-party basis.

“The decision on the same will be taken as per the outcome of the meeting,” said Khandu who was at Kodak village in Taliha constituency under Upper Subansiri district to attend a public meeting.

The panchayat election, along with the municipal elections of Itanagar and Pasighat, are due in the state since May 2018.

Earlier, in his speech, the Arunachal Pradesh CM urged the people of Upper Subansiri to cooperate with the government in the development process.

He said due to various compensation issues, many important road projects in the district are pending.

Khandu said smooth connectivity to Itanagar and construction of road from Taliha to Tato was being delayed due to compensation issues.

He said the community apex bodies have been very effective in solving compensation issues and also in convincing people to not hamper the development process by demanding compensation.

“Similarly, community apex bodies in western Arunachal can play an effective role in expediting the development process as the state government looks upon them for its assistance in the development,” Khandu said.

He further said Arunachal has huge potential in sectors of hydro, Agriculture, mines and minerals but couldn’t be utilized to its full potential because of our own weakness to overcome shortcomings in policy decisions, bureaucracy and in exerting political will.

Khandu urged for the cooperation of local legislators and government officers in realizing the state’s full potential.

The Arunachal CM also requested the local legislator to prioritise schemes and called for a robust planning process.

He informed that funds under the member of legislative assembly will be increased so that development in respective constituencies can be boosted.

He also assured the state government will take up the matter relating to expediting works on Tato-Taliha road by the border roads organization.