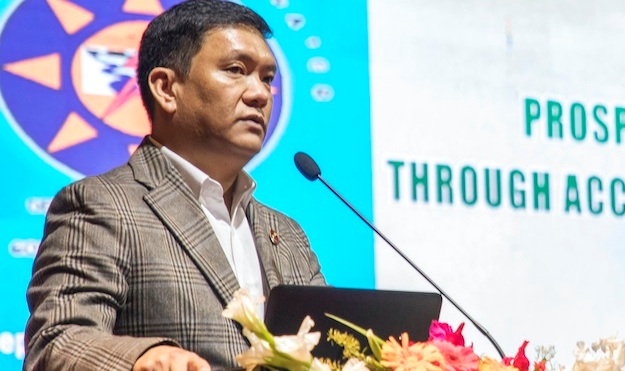 Arunachal Pradesh chief minister Pema Khandu has termed hydropower as the future of the state owing to the calculated 50000 MW of power generating capacity the state possesses.

Khandu, however, regretted that so far the state has been able to generate only about 2% of its potential.

Speaking at a seminar on ‘Prosperity of Arunachal Pradesh through accelerated Hydropower development’ here, the chief minister said despite being the richest state in the country in terms of hydropower resources that could overhaul its state of economy, Arunachal Pradesh still has to depend upon the Center for its sustenance.

“For the last 10-15 years we have been told that Arunachal Pradesh is the powerhouse of India. Where is this powerhouse?” he questioned.

Stating that the people have given this government full mandate to steer the state on the path of accelerated development, Khandu said this five-year period (2019-24) should be the turning point for Arunachal Pradesh and its people.

He appealed all attending the seminar to prioritize 10 hydropower projects that could be taken up during this period.

“There’s no point taking up projects at random. Let us focus on 10 feasible and beneficial projects and we will take these up on mission mode,” he said.

Khandu, however, asserted that mini and micro hydel projects should also be implemented side by side at places that do not have grid connectivity.

Reiterating that the state has the potential to substantially enhance its revenue generation provided there’s a strong political will, Khandu informed that the state revenue which stood at about Rs 900 crores when he took over as Chief Minister in 2016 has increased to about Rs 2000 crores in 2018-19.

“As has been projected, think how much will be our revenue when we start earning Rs 15000 crore per year only from hydropower projects if implemented?” he wondered.

The chief minister blamed ‘petty politics’ played by some vested interests in putting hurdles or stalling power projects in the state.

Without naming anyone, he said that as the government is stable with absolute majority, detractors have nothing to do but play ‘petty politics’ and hamper developmental projects just to harass the ruling government.

“In my opinion those who put hurdles in developmental projects just for the heck of it are anti-nationals. I call upon all, even those in the opposition, to shed our politics and join hands with the government to bring in investments and successfully complete all developmental projects including hydropower,” he appealed.

The chief minister warned government officials – from the top to the lowest level – to refrain from conniving with vested interests and indulging in acts hampering projects.

“I have directed our Chief Secretary to take to task any official found to be misleading the people and hampering implementation of projects,” he revealed.

Deputy chief minister Chowna Mein, who also holds the ministry of Hydro Power, said Arunachal Pradesh has been ‘crying’ for lack of resources when the ‘resources’ are right at the doorstep.

Urging all not to look further, he called for united efforts to harness the hydropower potential which is abundant in the state.