An Industrial and Investment Policy framed by Arunachal govt that would offer various incentives to investors: Khandu 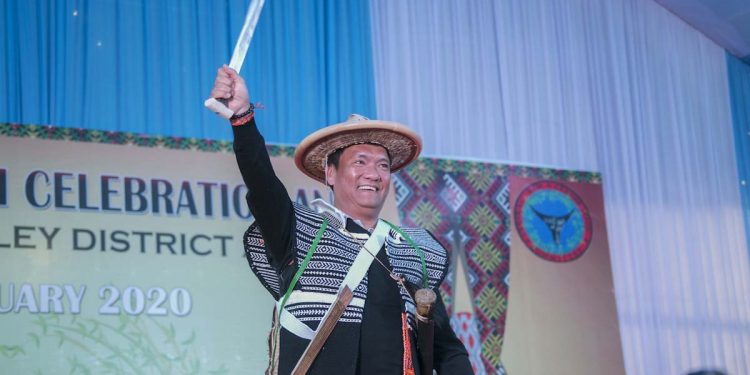 Pema Khandu on Monday became the first Arunachal Pradesh chief minister to travel all the way by road from Itanagar to Anini to join the Mishmi community in celebrating the 52nd Reh festival.

Anini is the headquarters of Dibang Valley district.

Icing on the cake – particularly for the people of Anini – was the attendance of the ‘Gangs of Wasseypur’ star Nawazuddin Siddiqui, who too arrived by road from Dibrugarh, an arduous journey of about 9 hours.

Greeting the people on the auspicious occasion, Khandu expressed gratitude to the Mishmi community for having him in their midst.

Also read: Actor Nawazuddin Siddiqui to shoot his next film in Arunachal

He said Reh festival is the identity of the community that honours their priests who are at the core of the festival.

Siddiqui accepted the invitation to join the celebrations and to meet the Indian Army personnel guarding the frontiers while knowing the distance and bad road conditions due to ongoing works on it.

Lauding the scenic beauty of Dibang Valley, Khandu said Anini and adjoining areas have optimum potential to become the top destination for tourists from across the globe.

“People know about Tawang and Mechuka but I can vouch that if we mix Tawang and Mechuka, the by-product will be Anini! I guarantee that Dibang Valley will emerge as the most sought after tourist destination of Arunachal Pradesh in years to come,” he said.

Khandu assured that the under-construction two-lane highway from Roing to Anini will be completed in four years and once done the face of the district will change massively.

He pointed out that due to the difficult terrain and distinct topographical features of the district, the initial work on the 230 Km road is taking the time. He informed that the state government is taking up completion of the road on top priority.

Arunachal Pradesh chief minister Khandu marked tourism in its various forms as the greatest potential of Dibang Valley and urged the Mishmi youths to get themselves equipped with the tourism and hospitality trade.

He specifically encouraged people to go for homestays as tourists, especially those from abroad, prefer to stay with locals rather than in hotels.

Citing that despite potentials Arunachal Pradesh still lags behind when it comes to industrialization, he said the need of the hour is to attract investment.

He said an Industrial and Investment Policy has been framed by the state government that would offer various incentives to investors.

He informed the policy would be released by union home minister Amit Shah, who is expected to attend the Statehood Day on February 20, as the chief guest.

Khandu also appealed to the people not to be swayed away by misinformation regarding the proposed hydropower project in the district.

He urged those who have any doubts on the project to contact him or the chief secretary for clarification and called upon them to be partners with the government so that developmental projects get implemented successfully and smoothly.

Responding to a memorandum submitted by local legislator Mopi Mihu, the Arunachal Pradesh chief minister assured to construct the road from Achenso to Biyanli under CRF or NESID and asked Chief Secretary Naresh Kumar to pursue the same.

To the request for a new circuit house at Anini, Khandu assured that the proposal will be included in the upcoming state budget.

Earlier in the day, Khandu inaugurated a Fire Station and Water Treatment Plant and laid the foundations of SDO headquarters at Arzoo, a mini-stadium, district hospital building and a mini secretariat at Anini and an innovative and multipurpose water harvesting at Gipulin.

He also visited the Indian Army camp at Anini and interacted with the officers and jawans of the Kumaon Regiment posted there.