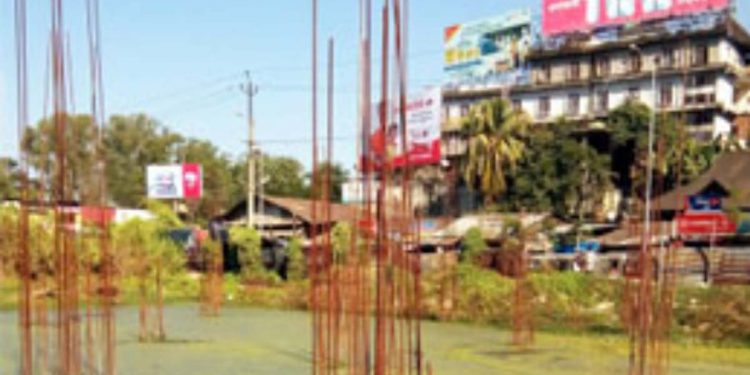 The Jorhat district AASU has demanded a high-level probe into the failure of Jorhat Municipal Board (JMB) to complete the multi-storied car parking project at the old public bus stand.

The JMB has failed to complete the multi-storied car parking project beside the AT Road in Jorhat town, in the last six years.

The All Assam Students’ Union (AASU) has demanded that a probe be ordered by the state government into alleged financial anomalies in the project.

The AASU also urged the government to find out the reasons for non-completion of the project.

Addressing the media at the Jorhat Press Club on Monday, AASU state organising secretary Jul Khound slammed the present BJP-ruled JMB for neglecting the ambitious project which was aimed to ease the traffic congestion.

Khound, citing documents acquired through RTI queries, said the project, foundation stone of which was laid during the tenure of the previous Congress-led JMB, has become a white elephant.

Former Assam chief minister Tarun Gogoi had laid the foundation stone for the project on October 1, 2013.

The JMB during the tenures of both the Congress and BJP paid about Rs 6.5 crore to the contractor out of the total of Rs 10.51 crore, the estimated cost of the building, which remains half-built.

Only the basic structure of the building has been constructed, which has now become a shelter for stray dogs and anti-social elements, the AASU leader alleged.

Blaming present Jorhat’s BJP MLA Hitendra Nath Goswami, who is also the speaker of Assam Assembly, for not giving attention to the project, Khound sought a White Paper on the status of the project.

He said the state government should have looked into the matter as government fund has been used in the project as there is a department to look into the affairs of the civic bodies which get substantial government funding.

The AASU leader also said the Jorhat Municipal Board (JMB) has failed to take legal action against the contractor of the project and blacklist him for the delay.

Khound further said the government should initiate steps at the earliest to complete the multi-storied building meant for vehicle parking.

Khound said the Jorhat Municipal Board should take action against shops illegally running from areas meant for basement parking of vehicles.

He also questioned how shops opened in areas meant for vehicle parking to get trade licenses.

“If no trade licenses were issued then how could such shops operate?” he questioned.

Bijoy Shankar Bordoloi, assistant general secretary of Jorhat district AASU warned that if the state government and JMB fail to pay heed to their demands within this month-end they would resort to next course of action against the government and the JMB.