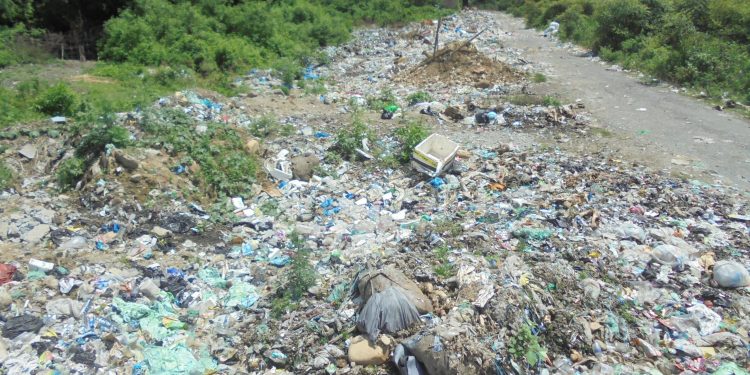 The burial ground has been used by all local communities irrespective of cast creed and religion.

The residents of Jarku (Muriline) area falls under Ward-10 of Pasighat Municipal Council (PMC) have alleged that the PMC is dumping the waste garbage inside the burial ground without taking their consent.

This has created resentment among the local residents as well as urban dwellers of the township.

It is observed that heaped garbage rotten in the burial ground is emitting foul odour.

This is also resulting in environmental pollution at nearby human habitations posing serious threat to community health.

The sufferers recently submitted petition to the deputy commissioner of East Siang narrating their problems.

However, it is alleged that their plea to clean the area is yet to be heard.

“The PMC authority has been dumping waste garbage in the burial ground since 2016, which has turned the human habitation within PMC Ward-10 into health hazard zone,” rued Baang Mize, a resident of Jarku (Ward-10) in Pasighat urban area.

“The PMC authority is continuing the unhealthy practices ignoring our repeated objections,” the local resident added.

Mize informed that local residents urged the PMC body to choose alternative site/location for garbage disposal, but their proposal is going unheard by the urban body officials.

Another resident and former ward secretary Nong Doming has lamented that the local MLA, former deputy commissioner and PMC officials, who visited the burial ground and took stock of local residents’ problem three years back, assured to redress their grievances.

But allegedly, no initiative has been taken so far from their ends in this regard.

Stating that the alleged activities of PMC officials is likely to violation of human rights, the local residents of Jarku have decided to move National Human Rights Commission for seeking right to live on their land with healthy atmosphere.

Around Rs 274 crore was earmarked for phase-wise improvement of infrastructure of the burial ground.

The local people also raising question over utilization of fund meant for development of the burial ground as they are not aware about the release of funds to the mega project.