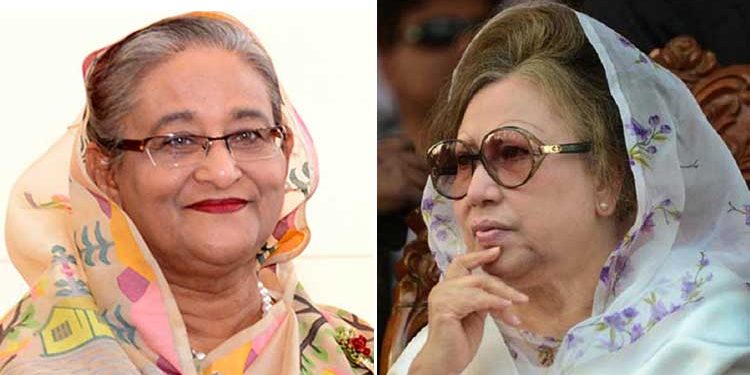 With the Bangladesh parliamentary elections barely a month away and much at stake for India, there seems to be a concerted narrative emanating from the Islamist Opposition in the country that the ruling Awami League‘s defeat is imminent and that it would rig the polls to stay in power.

The Bangladesh Nationalist Party (BNP), which boycotted the 2014 parliament polls demanding a neutral caretaker dispensation to conduct the polls, is lobbying hard with Western countries and India to ensure a ‘free and fair poll’.

Some civil society groups in Bangladesh and a section of the media has joined the campaign to force Sheikh Hasina to step down and let a neutral dispensation conduct the polls.

Hasina has made it clear that will not happen and if polls can be held in India and the US with the ruling party in power, the same can happen in Bangladesh.

The 71-year-old Prime minister faces considerable anti-incumbency after nearly ten years in power and much factionalism within her party, what with 4000 aspirants competing for party nominations to 300 parliament seats. But her personal image as a development driven nationalist determined fulfill her father’s dream of ‘Sonar Bangla‘ (Golden Bengal) remains unsullied and she remains the biggest trump card for her party.

The recent public attitude survey by the US-based International Republican Institute (IRI) found that 66 per cent of the respondents supported Sheikh Hasina as Prime Minister and 64 per cent supported the Awami League for leading the government.

There is no reason to believe that the IRI, a non-profit and non-partisan which works in 33 countries to advance the cause of democracy, would have good reasons to do the Awami League a favour.

It has stood by its findings and defended its sample and methodology, saying its data was collected by using a multi-stage stratified probability sample through in-person, in-home interviews.

The sample was stratified by division, by district, and by urban and rural locations.

The 33-page survey titled ‘National Survey of Bangladesh Public Opinion’ said a staggering 62 per cent people believe the country is going ahead on the right path, and as many as 69 per cent people are satisfied with the current state of the economy.

It added that 57 per cent people believe the security situation will improve in the coming days.

About basic services, the government got majority endorsement as 67 per cent of the respondents said they were happy with healthcare service, 64 per cent with electricity situation and 61 per cent with the development of roads, highways and bridges.

The IRI survey was no flash in the pan.

Surveys of public attitudes conducted by organizations other than IRI have also come up with similar results after 2014.

A survey in 2015 by the British Council, Action Aid Bangladesh and the University of Liberal Arts Bangladesh, showed 75 per cent of Bangladeshi youths see the country as a more prosperous nation in the next 15 years and 60 per cent think it is heading in the right direction.

Seventy two per cent of the respondents in that survey were positive about Hasina running the country and only 26.6 per cent respondents said Khaleda Zia as a good choice to run the government.

The Independent-RDC public opinion survey, whose findings were released in June last year, found 57 per cent of the respondents supporting Awami League as the party of their choice against only 19 per cent supporting BNP and 15 per cent the Jatiya Party.

Another report by BMI Research of the New York based Fitch group in July this year said the Awami League was in a strong position to face the polls while the BNP had been significantly weakened.

It attributed this to the violent campaign of the BNP during and after the polls and the proxy leadership of Tarique Rahman who is based in London for nearly a decade now.

Those who closely follow Bangladesh’s amazing development story are not surprised.  Bangladesh’s GDP has grown steadily at over six per cent for the last eight years.

In the last three years, Bangladesh’s gross domestic product (at current prices) in dollar terms grew at a compounded annual rate (CAGR) of 12.9 per cent, more than twice India’s 5.6 per cent.

As a result, per capita income (in dollar terms) in Bangladesh is now growing at nearly thrice the pace of income growth in India.

Bangladesh is also ahead of India in the human or social development indicators of infant mortality rate and life expectancy at birth.

A newborn in Bangladesh is more likely to see her fifth birthday than her Indian or Pakistani counterpart. She is also likely to live longer in Bangladesh (72.5 years) than India (68.6 years) and Pakistan (66.5 years).

The huge trickle down effect of the Bangladesh growth has created a solid support base for Sheikh Hasina and her party and the BNP and its allies have little comparable to show for its two full terms in power ( 1991-96 and 2001-2006).

Whether this could help Hasina overcome the usual anti-incumbency and the huge factional squabbles within the Awami League to secure a record third term in power, however, remains to be seen.

India is closely following the rundown to the Bangladesh polls because it is keen to see the Awami League back in power.

With even Nepal and Maldives showing India the thumb, Bangladesh remains India’s closest ally in South Asia, despite the demonetization and shrill rhetoric of the saffron brigade.