Priyanka Gandhi said that a young unarmed woman has struck fear in the hearts of “those who are armed”. 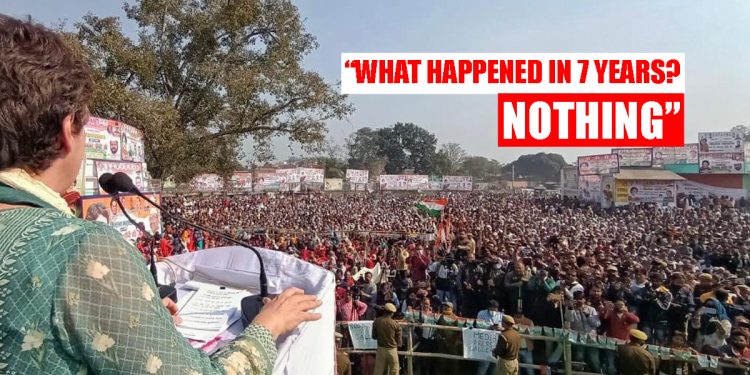 Top Congress leaders – Rahul Gandhi and Priyanka Gandhi on Monday launched an all-out attack on the Centre over the arrest of climate activist Disha Ravi and the ongoing farmers protests.

Congress general secretary Priyanka Gandhi on Monday demanded the release of the 22-year-old climate activist Disha Ravi, who was arrested by the Delhi Police in ‘Toolkit’ case.

Taking an indirect dig at the Delhi Police, Priyanka Gandhi said that a young unarmed woman has struck fear in the hearts of “those who are armed”.

“Those who carry guns are now afraid of an unarmed girl. The unarmed girl is showing us rays of courage,” Priyanka Gandhi said.

Earlier in the day, chief ministers of Chhattisgarh and Delhi also demanded the release of Disha Ravi.

“Arrest of 21-year-old Disha Ravi is an unprecedented attack on Democracy. Supporting our farmers is not a crime,” said Delhi Chief Minister Arvind Kejriwal.

Arrest of 21 yr old Disha Ravi is an unprecedented attack on Democracy. Supporting our farmers is not a crime.

In an indirect attack on the BJP Government in the Centre, Chhattisgarh Chief Minister said, “Cowardice and Fascism is their heritage.”

Priyanka Gandhi said that the farmers of the Country were mocked by the Government in the Parliament and dubbed them as traitors.

“The farmers were called out names such as ‘aandolanjivi’ and ‘parijivi’. We all know the the meaning of ‘parijivi’. Your ministers are calling the farmers as traitors,” Priyanka Gandhi said.

“Farmers have been sitting at the borders of Delhi, braving the bitter cold of the winter, for more than 80 days now. The farmers are now bracing themselves for the scorching summer heat. What are they sitting for? Prime Minister Narendra Modi says that the three farm laws are for the benefit of farmers. When farmers themselves are saying that they don’t want it then why are you not withdrawing them?” Priyanka Gandhi questioned.

“Did your income double? Did they increase the price of sugarcane from 2017? You should know that Rs 10,000 crore of the sugarcane farmers of Uttar Pradesh is due. This outstanding amount is Rs 15,000 Crore across the nation. He is such a Prime Minister that he has not given you your due amount,” Priyanka Gandhi said.

“Sometimes I think why people chose Modi twice. They might’ve done it as they had hopes and trust that he would work for them. A lot was said during the first election. He spoke of farmers, unemployment and others in the second. But what happened? Nothing,” Priyanka lamented.