Rahul Gandhi minced no words as he launched a veil attack on the ruling BJP Governments at the Centre and the State. 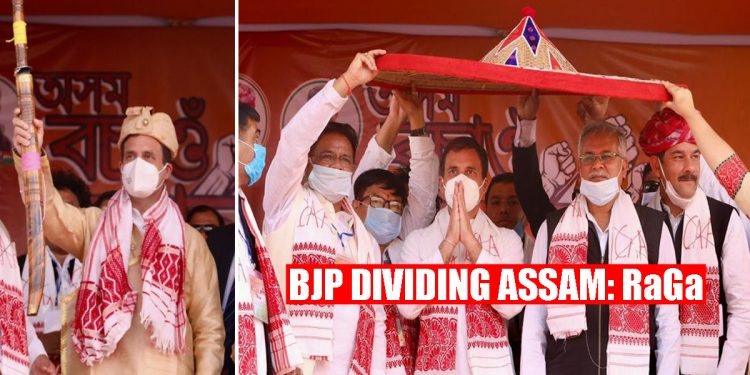 Congress leader Rahul Gandhi has kick-started the party’s campaign in Assam for the upcoming Assembly elections.

With Assembly elections knocking at the doors in Assam, all top national leaders now seems to be heading to the State.

Be it Prime Minister Narendra Modi, Home Minister Amit Shah or Congress leader Rahul Gandhi, all seems to be making their way to poll-bound Assam.

A sea of people turned up at the Sivasagar Boarding Field to get a glimpse and listen to the Congress leader.

Shri @RahulGandhi gets a rousing welcome in Sivasagar, Assam.#RahulGandhiWithAssam pic.twitter.com/pjFRMV8CFi

This was the first public meeting of Rahul Gandhi in Assam ahead of the crucial Assembly elections in the State.

The energy and excitement in the crowd is palpable as Assam gears up for Shri @RahulGandhi ji’s visit. Sivsagar today is draped in Congress colours. pic.twitter.com/ua1gZlrWdq

Rahul Gandhi minced no words as he launched a veil attack on the ruling BJP Governments at the Centre and the State.

Rahul Gandhi accused the ruling BJP and RSS of creating division among various societies residing in Assam and destroying the social fabric of the State.

Raking up the issue of Citizenship Amendment Act (CAA), Congress leader Rahul Gandhi, while addressing the public rally in Sivasagar said that his party will protect every principle of the Assam Accord and will never implement CAA if voted to power in the State.

“If Congress is voted back to power in Assam, CAA will not be implemented under any circumstance,” Rahul Gandhi asserted.

Notably, Rahul Gandhi along with other senior party leaders from Assam were seen donning traditional Assamese ‘gamocha’, with ‘No CAA’ written on it.

Earlier, last week Home Minister Amit Shah had said that the CAA will be implemented in the Country, as soon as the COVID-19 vaccination drive gets over.

“Assam Accord brought peace in Assam. The Congress will protect each and every principle of the Assam Accord,” Rahul Gandhi said.

Rahul Gandhi termed the Assam Accord as the ‘protector’ of the State.

“No power in the world can break Assam. Whoever will try to touch the Assam Accord or spread hatred, Congress party and the people of Assam will teach them a lesson together,” Rahul Gandhi said.

Taking a dig at Assam Chief Minister Sarbananda Sonowal, Rahul Gandhi said that the State is in need of a chief minister from their ‘own people’ who would listen to their issues.

“The present Chief Minister does as directed by Nagpur and Delhi,” Rahul Gandhi said.

Launching a scathing attack on Prime Minister Narendra Modi and Union Home Minister Amit Shah in Sivasagar, Rahul Gandhi accused the Centre of selling off natural resources and PSUs in Assam to two leading businessmen in the Country.

Congress Party stands united with the people of Assam in their fight against misrule and misgovernance of the BJP government. Together, we will bring Assam back on the track of peace and development.#RahulGandhiWithAssam pic.twitter.com/6Wo2U8zfKa

Speaking on the welfare of the tea community in Assam, Rahul Gandhi said that the congress party, if voted back to power will raise the daily wage of the tea garden workers up to Rs 365 per day.

“Congress united people of Assam. Earlier there was no surety whether one would return home safely due to violence,” Congress leader Rahul Gandhi said at the rally in Sivasagar.

Notably, the Congress in Assam has launched its ‘Axom Basaon Ahok’ (Come Lets Save Assam) campaign across the State, with the aim of ousting the BJP from power.

Elections to the 126-member Assam Legislative Assembly is scheduled to be held in April-May this year.