Amit Shah had said that the CAA would be implemented in the Country as soon as the COVID-19 vaccination gets over. 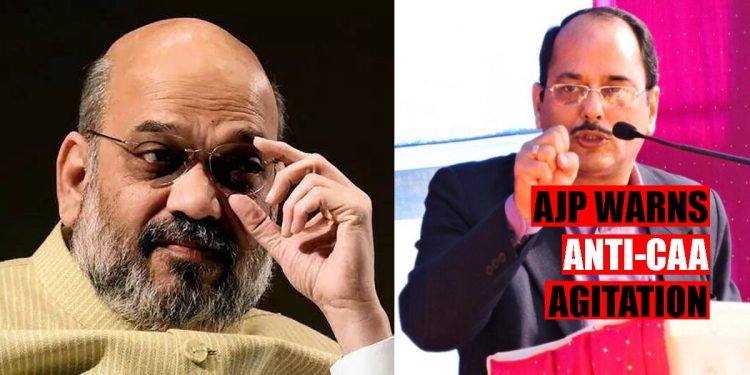 The Assam Jatiya Parishad (AJP) has lashed out at Union Home Minister Amit Shah over his statement over implementation of controversial Citizenship Amendment Act (CAA).

Home Minister Amit Shah had said that the CAA would be implemented in the Country as soon as the COVID-19 vaccination gets over.

Amit Shah made this statement while addressing an election rally in West Bengal on Thursday.

The AJP while condemning the statement of Amit Shah said that this remark by the Union Home Minister has once again “revealed the true face” of the BJP, which is “Anti-Assam”.

Briefing the media, AJP Vice-President Adip Kumar Phukan said that a massive agitation would be launched in Assam, if the BJP-ruled Central Government tries to implement the ‘draconian’ law.

“If the BJP government tries to forcefully to implement the CAA, which is not only anti-Constitution but also harmful to the secular fabric of the country, then the people of Assam will oppose the move,” Adip Kumar Phukan said.

“Amit Shah’s statement has once again revealed true face of the BJP Government. But we are ready for any challenge and consequence,” AJP Vice President Adip Kumar Phukan said.

Notably, the AJP and Raijor Dal are the two new regional parties in Assam, which were born out of the anti-CAA agitation that gained momentum by the end of the year 2019.

AJP came into existence in September 2020.

The AJP is being backed by two apex students’ bodies in Assam – the All Assam Students’ Union (AASU) and the Assam Jatiyatabadi Yuva Chatra Parishad (AJYCP).

Also read: Air travel to get costlier, Centre hikes airfare by 30 per cent