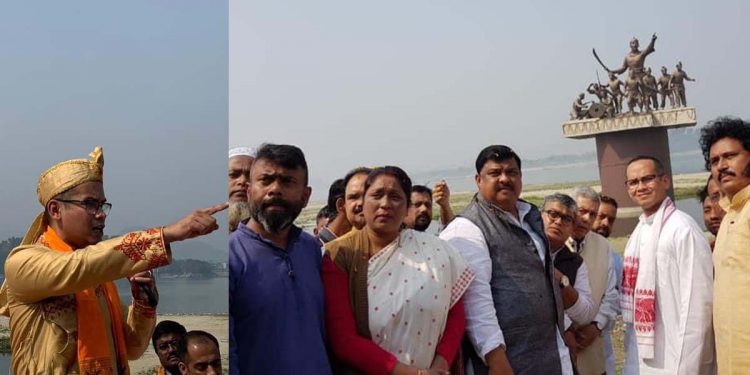 “This is not a Congress Yatra but a Yatra of Assam, a dream of Assam and hope for the people of Assam,” a party press statement quoted Gogoi as saying during the commencement of his address.

Lashing out at the BJP, Gogoi questioned, “If Amit Shah is truly a Home Minister of our great nation, why has he not visited the homes of CAA martyrs and explained to their mothers, the unfortunate fate that their sons have suffered at the hands of the BJP?”

“The people of Assam are chanting slogans of ‘CAA Ami Namano’, which means the people want to do away with this redundant law, we should come together and completely reject the evil communal politics of BJP,” he added.

Gogoi in his speech criticised the government for the “unjust” price hike in local produces, especially that of crude oil.

Kaliabor MP Gaurav Gogoi, who is the son of ex-Assam chief minister Tarun Gogoi, said, “Late Shri Tarun Gogoi’s ideology will once again come to Assam – his dream of peace and harmony in Assam, the dream of the people.”

He said, “The BJP may state that we are young, but the youth consists of Assam’s soldiers and we will fight till the very end. Congress will come back to restore the ethos of Assamese identity.”

“We salute the young students for raising their voice against BJP’s tyranny and salute the farmers who are braving extreme conditions to rally for their rights,” he added.

Gogoi furthered the Yatra to Chandmari where he replied to BJP’s attack on Congress workers.

He stated: “The local population has suffered immensely due to the lockdown, yet BJP is only concerned about relieving big companies of taxation policies.”

“BJP is spreading hate amongst the people so that we forget about more pertinent issues,” Gogoi said.

The journey commenced with Bordoloi’s interaction with the traders’ community, in Bokakhat where he briefed the press about Congress’ strategies on countering BJP for the ensuing elections in the state.

“Congress will begin a ‘Mohajot’ to annihilate the Bakasura, the evil of Assam politics, which has manifested itself as the BJP-rule,” stated Bordoloi at the press briefing.

“BJP only supports AIUDF on face-value because of their political manifesto. AJP and Raijor Dal are not our enemies; we share the same dream and ideologies,” Borodoloi said.

“BJP is trying to eliminate the Assamese sentiment with the aid of their right-wing extensions such as the RSS and Bajrang Dal,” he said in his address.

He further said, “It will be a historical mistake if AJP and Raijor Dal help BJP win again. What happened with regard to Akhil Gogoi’s arrest is shameful, Arnab Goswami was released overnight. Our democratic institutions have been corrupted by the ruling Government.”

“Himanta Biswa Sharma is the head of the dirty-tricks department. Do not let him arm twist the public into believing his lies. The AGP should come back to the Assamese people instead of blaming the Congress,” he asaid.

“Congress’ primary goal is to restore stability in Assam by eradicating BJP’s dictatorial rule. Congress won 80+ seats alone and now, with an alliance, we are aiming for over 101 seats in the Assembly,” he further said.