Pakistan-based terror outfit Al Badr had planned to carry out explosions in at least 4 locations. 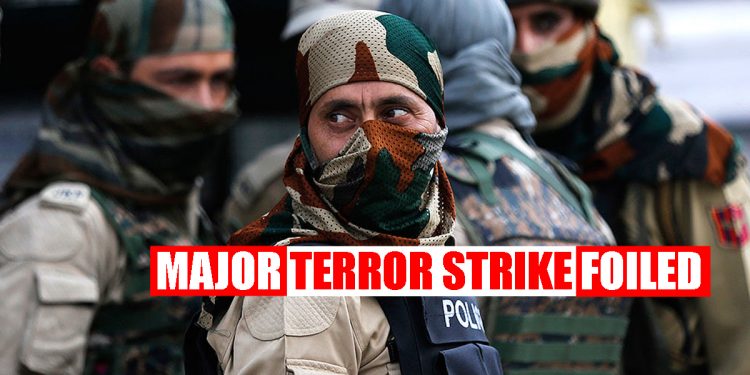 A major tragedy was averted in Jammu and Kashmir on Sunday as terrorists were planning to carry out a major strike on the occasion of the 2nd anniversary of the Pulwama attack.

“We were on high alert as we had inputs that terror groups were planning an attack on the anniversary of Pulwama attack. Last night we arrested a person named Sohail and recovered 6.5 kgs of IED from his possession,” Jammu Police Inspector General (IG) – Mukesh Singh said.

One person has also been arrested in connection with the recovery.

“Sohail revealed during probe that he studies in Chandigarh and he received message from Pakistan-based terror outfit Al Badr to plant IED at Jammu Bus stand,” said IG Mukesh Singh.

Terror outfit Al Badr had planned to carry out explosions in at least 4 locations.

“Sohail was given three-four target locations to place the IED, after which he was supposed to take a flight to Srinagar where an Over Ground Worker of Al Badr named Athar Shakeel Khan would have received him,” IG Mukesh Singh added.

Moreover, a total of 15 small IEDs and 6 pistols were also recovered by the police during a night-long raid at Samba on Saturday.

The seizures averted a major explosion on the second anniversary of the Pulwama terror attack.

On February 14, 2019 forty Central Reserve Police Force (CRPF) jawans were killed after an explosive-laden car driven by a Jaish-e-Mohammad suicide bomber rammed into their bus in Pulwama.

Did not Forgive, will not Forget: Salute to our brothers who made the supreme sacrifice for the nation in #PulwamaAttack . Indebted, we stand with the families of our valiant Bravehearts. pic.twitter.com/pNAAvuCJUU

General MM Naravane #COAS & All Ranks of #IndianArmy pay homage to the brave jawans of Central Reserve Police Force who laid down their lives in the line of Duty during a Terrorist attack in #Pulwama on 14 February 2019.#14FebPulwamaBravehearts pic.twitter.com/3dL8NCHQpt