While Assam Chief Minister Sarbananda Sonowal is trying his best to establish Guwahati as the “Sports Capital of India”, the ruling BJP has been accused of “destroying” one of the finest playgrounds of Assam.

Ranjeet Neog, Associate Director of Students Welfare (ADSW) of the Assam Agricultural University (AAU), in a reply to an RTI application, held the BJP and Kamrup (Metro) district administration responsible for destruction of the playground of the College of Veterinary Science at Khanapara in Guwahati.

During the last five years, the picturesque Multi-purpose Sports Complex at the southern fringe of Guwahati city transformed into a venue for mega political meetings, exhibitions and other non-sporting activities.

Neog said the standard twin cricket pitch at the sports complex, which was inaugurated in March 2011, is not in working condition now “due to earth-filling works by the BJP Assam Pradesh”. The cricket pitch was laid at the playground under supervision of experienced curators to promote the game of cricket.

The ADSW of AAU said the BJP had undertaken the earth filling works on the twin cricket pitch in May 2017 in connection with the visit of Prime Minister Narendra Modi for the celebrations of completion of three years of NDA government at Centre and one year of the BJP government in Assam.

The Multi-purpose Sports Complex of the College of Veterinary Science at Khanapara stands on a plot of 46.60 bighas land, and has approach road from all four sides. It was set up in 1977 for promotion of different types of sporting activities. 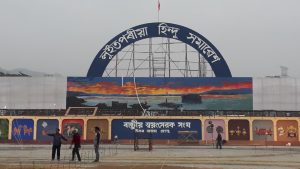 Students of the College of Veterinary Science complained that at times they are chased out of their own playground prior to the mega events of the political parties. There are reports that even one senior professor of the AAU, who had gone to playground for a walk, was chased out by policemen a day before RSS’s Luitporia Hindu Samavesh, which was held on January 20 and 21 this year.

While organising non-sporting activities on the playground, it is often seen trucks and heavy vehicles plying in the sporting areas of the playground, and have ruined the high-quality grass cushion, which the AAU authorities have maintained over the last four decades.

Footballers now complain that the ground has become so hard that the plastic spikes of their boots don’t give them the grip which is required to play the game of soccer. Moreover, the players need to be careful about nails and other sharp objects left behind by the organisers of the non-sporting events.

Ranjeet Neog also informed that the Circle Officer of Dispur Revenue Circle in February 2014 ordered the breaking of the boundary wall of the sports complex at several places to arrange law and order during a public meeting addressed by Narendra Modi before the last Lok Sabha election.

The broken portions of the walls were to be restored by the BJP Assam Pradesh as assured, Neog said, adding that the walls have not been restored even after four years of the demolition.

“No official of AAU authorised any organisation to demolish the walls and no organisation paid any compensation to AAU,” Neog said, adding that efforts were on to pursue the BJP to repair the walls at the earliest.

The AAU official said the Kamrup (Metro) district administration laid 91,130 numbers of concrete blocks in several places on the western part of the play ground for construction of a temporary helipad for smooth landing of VVIPs. About 1,938.94 square metre of the playground has been covered by the concrete blocks.

“No permission in this aspect was given by the AAU authority to any agency to lay these blocks in the sports complex,” Neog said, adding that the work was undertaken by Assam Public Works Department (PPC Division).

“This is shocking how the ruling government and the Kamrup (Metro) district administration could do such things to totally destroy one of the finest playgrounds of Assam,” Kabya Jyoti Bora, one ex-student of the College of Veterinary Science told Northeast Now on Thursday.

Infuriated Bora demanded that the state government should immediately force the BJP Assam Pradesh leaders to work on a war-footing to restore the playground. “When open spaces in Guwahati are shrinking, the AAU should not allow any non-sporting activity in the sports complex in Khanapara,” he said.

It is surprising as to why the state government could not identify alternate locations for holding of political meetings and exhibitions in Guwahati. If the government does not wake up to save the playground at Khanapara, the Chief Minister wish on establishing Guwahati as the “Sports Capital of India” will remain an unfulfilled dream.