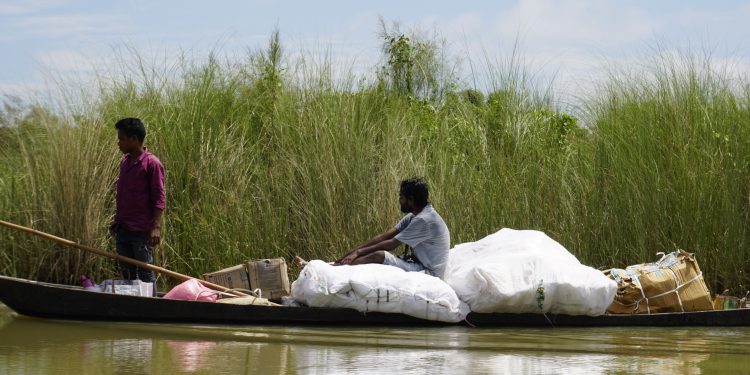 Look at the sky. We are not alone. The whole universe is friendly to us and conspires only to give the best to those who dream and work.

The ferocity of the river Brahmaputra reached its peak again this July in Assam.

As parts of lower and upper Assam alike were flooded, the people in the remotest corners of Assam were left on their own.

This story which is arguably as old as the river itself often inspires some stories of amazing grit and benevolence.

Such is one story of some children in Majuli who got together to help their friend and his village.

It was just another day in the Majuli children’s library, when suddenly one of the library’s students Meghali Payeng shared the devastation caused by floods in the village Jogibari.

All the children turned to their friend Dipankar Payeng, a young student of the library who was from the same village.

As we sat there and watched, the children came to use and tried to ask us how they could help.

Moved by their empathy, we approached the senior most person in the community, Haren Narah (ex TMPK president) and tried to understand the situation there in Jogibari village.

He mentioned how reaching the terrain might be difficult.

For the same reason, absolutely no aid had been offered by any organization.

Realsiing the dire need, we formed a team and took the responsibility about doing a Flood Aid initiative along with our library children at Jogibari village.

The enthusiasm of the children knew no bounds, and they were all set for a journey which inspired all of us.

The community members decided to do a fund raising among some people in the cities and on July 20.

We finally made a social media campaign on the Flood Aid initiative.

A difficult brainstorming session including the village headmen from Jogibari and Haren Da and we finally decided to give a mosquito net along with tarpaulin.

The basic understanding being, as the water level has gone down, a new threat of encephalitis epidemic was ensuing.

Hence the community was very sure that the mosquito net will be of a great help.

Secondly as the whole area was still wet it became a challenge to dry rice and other food items in the sun.

Hence we quickly figured out that the tarpaulin can be very useful.

We also added a torch light, sanitary pad and junior Horlicks for the young ones, to our kit.

Jogibari is a small village under Lakhimpur district.

However people from the village are more connected to Majuli, when it comes to healthcare, education and also for agriculture purpose.

Normally there are two bamboo bridges which connect them to Majuli, the overall distance is approx 13 kilometers from Garmur in Majuli.

Every year floods takes away the bridge and people use water transport as the most favourable means of communication.

The final figure of total families in Jogobari, which the village headmen confirmed were 161 families including 93 children.

Within a week’s time we raised Rs 70,000 from different parts of India and a major portion was contributed from a family in America.

As things were getting easy on this part, the biggest challenge was to reach Jogibari with 10 children from our community library in Majuli.

The first batch of team from Guwahati left for Majuli on August 1 last.

Together with the library children along with the community members we finished packing 161 relief bags, in about three hours.

On the four country boats arranged by Haren, we set sail to Jogibari with the relief materials on the morning of August 2 last.

We started our journey from Majuli, towards the Lohit river and then slowly we entered Subansiri which is a tributary of the mighty river Brahmaputra.

After sailing for almost one hour and 24 minutes we reached the entry point of Jogibari village.

Once we entered Jogibari village after sailing for more than an hour, we stopped at Dipankar Payeng’s house who studies in Majuli and stays at a hostel in Chitadarchuck.

Most of the children from Jogibabi village moves out to Majuli for higher education and better prospects as daily travelling isn’t possible for them. 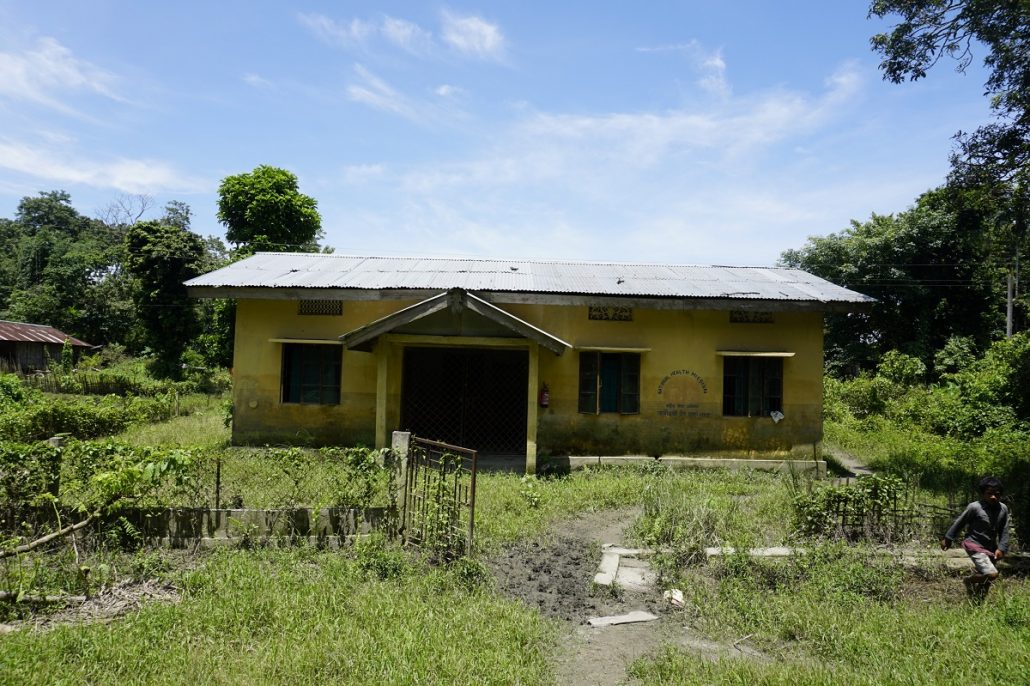 While on our way to Jogibari High school, we saw something which made us all realize the impact of floods every year.

In front of us, was Jogibari Laliti Morang ME School, which was taken away by Subansiri river in 2017.

The school had been set up on the other side of the embankment but we don’t know how long that would survive, as water entered the premises.

Within the first 15 minutes of reaching the Jogibari High School premises, a plethora of villagers gathered with excitement and hope.

Young boys were running around to inform the villagers about the starting of the program and they had set up table fans borrowed from families in the village.

The library children were the first ones to take charge and local village people greeted us with water.

With a basic sound system, the proceedings went smoothly.

The village headmen and Haren da decided on the final list of 161 families and we used the microphone to call out the names from each family.

The village headmen had made the list of names which represented one member from each of the families.

With moist eyes, an 80-year-old grand old lady collected a relief kit and blessed us all.

Finally a moment of happiness came upon all of us as we watched the warmth with which we were received.

Not once in the entire journey, did the children make a fuss about the hardships or get scared.

I felt like the Maati community belonged to the community and that we were one.

Our journey with the river of happiness came to an end,with a lot of new learnings and pushing us to believe in the seemingly impossible.

I kept looking at the river, wondering how it reduces us into our most vulnerable form. 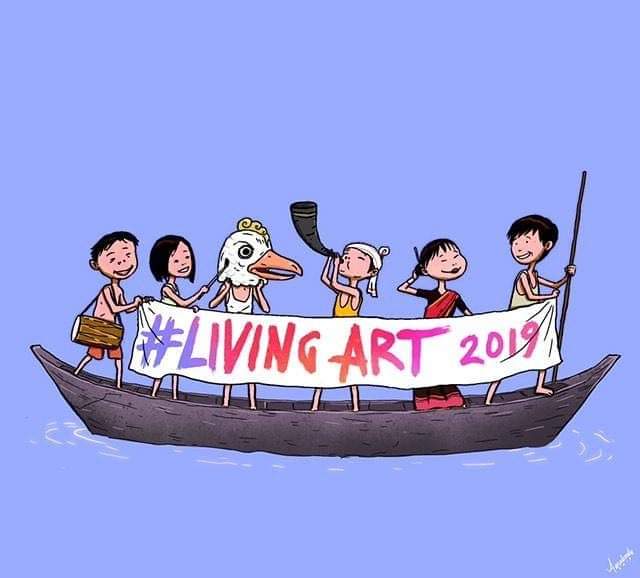 And yet, the very river and it’s boatmen made it possible for us to row towards the people.

This year as we prepare for the second Living Art Festival, 2019, I know that all our films, music, art or books must bring communities together.

They must leave us all more empathetic towards each other and make the young cherish their roots.

In the hope that we can all create the magic together, I hope I will see you in Majuli.