A Brahmaputra policy book where we barely see the river 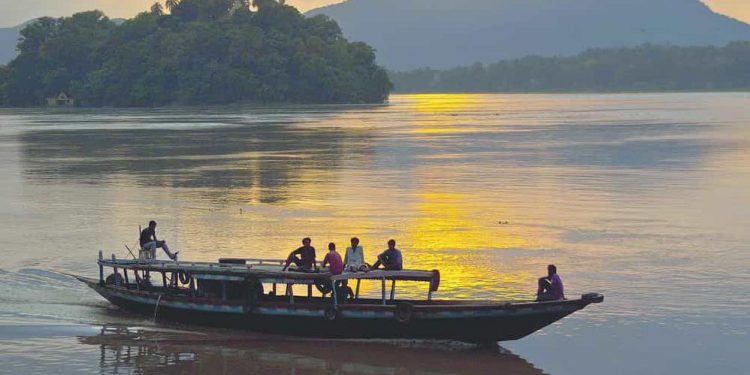 Raging Waters, a book published by the US Marine Corps University Press and CNA, “a non-profit research and analysis organization located in Arlington, VA”, looks at water issues related to the Brahmaputra river through the inputs of three ‘tributaries’ in the form of a chapter each from the book’s three authors, Joel Wuthnow, Satu P. Limaye and Nilanthi Samaranayake, who report on the Chinese, Indian and Bangladeshi perspectives respectively. It is a division that follows the course of the river itself. The Brahmaputra starts life as the Tsang Po in Tibet, becomes the Brahmaputra after the confluence of its three major tributaries at the foothills of Arunachal Pradesh, and after flowing through Assam, enters Bangladesh where it is known as the Jamuna.

The book is illustrated with 10 neat maps.

Its purposes are stated upfront in the preface itself.

It is, the authors say, aimed at providing ‘greater understanding of the equities and drivers fuelling water insecurity and resource competition in the Brahmaputra River basin’.

It also contributes, they say, to the burgeoning field of Asian water security analysis.

The research question it seeks first to answer is ‘What are the security implications of water resource competition in the Brahmaputra River basin?”’

Towards these ends, the books authors have delved into the literature in the three main countries in the Brahmaputra basin, and conducted interviews with experts and stakeholders in these countries.

The result is a lucid and detailed summary of the major plans surrounding the river in China, India and Bangladesh, and the concerns they have about actions and plans of the other countries with which they share the river.

Wuthnow, in his chapter, chronicles Chinese plans for building dams and diverting the Brahmaputra.

He reports, citing Chinese sources, that the prospects of the river being diverted are scant, and Chinese experts are dismissive of the idea which a study commissioned by that country’s Ministry of Water Resources in 2000 found to be ‘neither necessary nor feasible’.

However, there are plans to build three more dams in addition to the one called Zangmu that has been in operation since October 2015.

The Chinese, Joel points out, have given repeated assurances that these will all be run-of-the river dams, like the Zangmu, and therefore will not reduce or stop the flow of water downstream.

He flags mistrust between China and India due to territorial disputes, and Chinese concerns that Indian dam-building in Arunachal Pradesh is intended to strengthen India’s ‘actual control’ over the state which China claims is southern Tibet, as obstacles to possible cooperation between the two countries.

Limaye’s chapter begins with a repetition of the Chinese plan to divert the Brahmaputra, and goes on to mention the 2017 Doklam stand-off.

“India’s focus on the Brahmaputra River is framed almost entirely with reference to China. However, the reality is that India is physically a middle riparian country—between upstream China and downstream Bangladesh” he points out.

He identifies three drivers that shape India’s policies concerning the Brahmaputra River as they relate to China:

Limaye goes on to repeat China’s plans for damming and possibly diverting the river, and points out that Indian experts estimate only 40 percent of the water comes from the Chinese catchment area.

He writes that “India’s anxiety about asserting its riparian rights on the Brahmaputra River does not appear to stem from a legal or political challenge to these rights by China; there is no evidence that Beijing has challenged these rights, and official statements between the two countries repeatedly reference that China will respect these rights.”

“More likely, its anxiety comes from the objective of consolidating India’s rights to the territory where the transboundary Brahmaputra flows rather than to the waters of the river per se,” he adds.

The number of dams India plans to build is not easy to nail down, he notes, and finds that the number cited ranged in the mid-hundreds during interviews conducted by CNA analysts in New Delhi.

His chapter includes a segment on India’s river-linking project, a matter of grave concern for Bangladesh, which is further downstream.

This project makes a significant appearance in Samaranayake’s chapter, which is next.

She notes that “At present, India represents the greatest threat to Bangladesh’s water security due to its proposed RLP.”

However, the threat has not materialized, nor is its materializing imminent in the case of the Brahmaputra, she adds. RLP is a potential threat, but Bangladesh’s most immediate threats stem from internal challenges.

These include erosion, flooding, and diminished resources during the dry season.

Samaranayake’s chapter is the only one in the book in which the river itself is a presence.

It is described in a little detail, and its characteristics make a brief appearance.

The rest of the book is about the river but we barely see it anywhere.

It is akin to a report on the Amazon forest that talks only about the wood from the trees.

The entire perspective, typical of security policy, has no room for the living river, and the many other creatures that inhabit its vast basin.

There is a preponderance of dry statist perspectives on what China, India and Bangladesh might do to build dams or divert water, although the concern about water security is more rightly rooted in ideas of human security.

The book’s particular contribution apparently includes ‘integrating the study of a diverse set of issues related to water, international relations, and sub-national politics in the Brahmaputra basin—subjects that are not often analysed together.’

This is a reflection of the silos within which experts operate, rather than the holistic nature of analysis in this book.

The book as a whole is an attempt to bring neatness and order to an untidy river in a less than tidy corner of the world.

It is a continuation of efforts that began with the East India Company which commissioned Major James Rennell to map this and other rivers in the subcontinent in the 18th Century.

The worldview that drove the effort then, and drives the push for better ‘management’ and ‘connectivity’ now, are similar.

They rest on a foundation of mapping, classifying, and ordering nature with the sole aim of turning it into ‘natural resource’.

This is the worldview that has dominated policy making globally for centuries, and therefore it is entirely to be expected that it will be the only worldview in a book on ‘water resource competition in the Brahmaputra basin’.

It cannot be denied that water is an important resource, but there are serious limitations to a reductive worldview that cannot tell the wood from the trees, or the water from the river.

The Brahmaputra is not a canal.

It is an antecedent river, older than the Himalayas.

Life in its basin and in the valley that bears its name has evolved over millennia to its presence, and its annual rise and fall. Its worth cannot be measured solely in gallons or dollars.

To build a hundred dams in its basin would not consolidate Indian claims on Arunachal Pradesh.

It would kill the river and create a gigantic mess involving three countries.

That there is eagerness in India to build so many dams may have more to do with the amount of money that politicians, bureaucrats and contractors can make from the multi-million dollar contracts than anything else.

It is well known that Arunachal Pradesh has high levels of electoral corruption even by Indian standards, with votes being bought at astonishing prices, and therefore local politicians are always keen to recover their investments.

This leads to a long chain of corruption that extends, regardless of the party in power, from the grassroots in the state up to the powers that are in Delhi.

The intricate connections between river life and the lands through which it flows are not easily modelled.

This is true of webs of nature in general. Human beings, with the exception of the current American president and some of his acolytes, are realizing that climate change is real.

The security threat this poses, especially owing to possible distress migration, is underappreciated.

While it is true that all of human history is a history of manipulating the natural environment to our benefit, we have perhaps reached a stage where environmental concerns deserve a place in books such as this.

Seen in that light, the authors’ recommendation that China and India look at hydro-power as a potential area of cooperation is ill advised, and against the interests of the communities that inhabit the areas along the river.

As a text, Raging Waters suffers from a good deal of repetition, with the same points being repeated in different chapters and sections.

In addition, it quotes bombastic analysts whose knowledge of the river and the lands through which it flows is sketchy at best. What it does do right, however, is put together a handy compendium of policy moves and views from the three countries through which the river flows.

Its intention of promoting cooperation between China, India and Bangladesh on water issues is positive.

As a starting point for cooperation between these countries, transparency on positions and views is a must.

Therefore, the book, despite its flaws, is a welcome addition to the scant literature on the topic.

The writer is an author and journalist. He is on Twitter as @mrsamratx