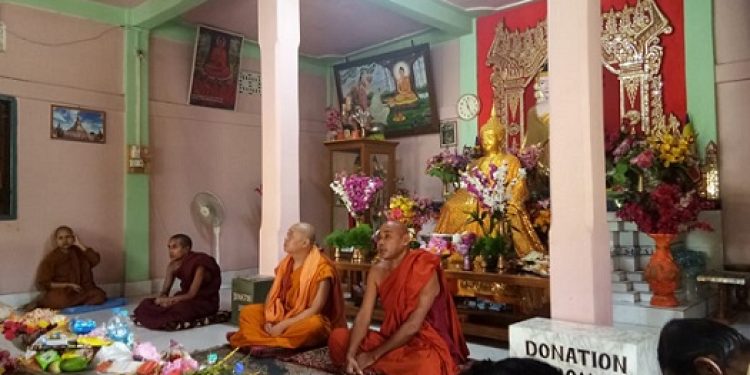 Maintenance of peace becomes a challenge when it comes to staying in a group for a long time. Given that errs and mistakes are commonplace in any human, confessing own mistakes and pointing out that of others is crucial in a long cohabitation. Here a polite reprimand is a much-needed practice. This is the subtle message behind the celebration of ‘Pavarana’ festival, which the Theravada Buddhist communities of Assam observe like their Dhamma counterparts across the world on Ahin Purnima (the full moon day of the sixth Assamese month). This time it falls on October 24.

‘Pavarana’ literally means ‘inviting admonition or inviting others to advise one’. The ritual of Pavarana marks the end of the three months rain retreat or vassavasa that generally starts in July. During these three months period, the monastic folk does not move around. They stay in a monastery or at any quiet place in the forest. They spend most of the time in studying scriptures and in contemplation. It is a time of retreat for the lay people also. In fact, during this period, the monastic and the lay alike make a variety of determinations which make them lead a life of restraint. Pavarana is the closing ceremony of this retreat. Thus for the monastic, it is the end of their stay within the confines of the monastery. And for the lay, particularly for those who have been on strict practice, it means a time for bit relaxation. This ritual also signals the advent of kathina— robe-offering ceremony— that lasts till the next full moon day.

Pavarana, as the name of the ritual implies, is a day of admonition. The scriptures said, on this day, the Buddha allowed the monastic community to reprimand one another for any offences they have done in their cohabitation at the monastery during the three-month rain retreat. The Buddha, whose chief concern was human suffering, was well aware of the fact that dissension, conflicts, strife, breaches, and argument are commonplace when a group of people cohabitates in a place for long. So he laid down certain rules for peaceful settlement of the strife with open-mindedness, kindness, love, and compassion, and not with prejudice. The monastic do it according to what is recorded in Vinaya Pitaka.

In a conversation with this writer, the chief monk of Margherita Buddha Vihar Gyanawada Bhikkhu said, “Observance of the Vinaya is what we primarily keep in mind when we celebrate the holy Pavarana.  Thus on this day, we admit our own offences (if any) and point out that of others as well very humbly, seek for forgiveness and make promises of not committing the same offence again.” It implies that it is not an occasion of open debate where both the parties will have heated exchanges ruthlessly. Rather it is a formal meeting of the community to discuss the pros and cons of monastic life and to advise one strongly to rectify his conduct if his behaviour is found to go against the rules of the monastic life and at the same time to examine one’s own conduct so it does not create mayhem in the sangha. However, the admonition is done with profound love, compassion, and loving-kindness (metta).

There is an interesting story relating to this ceremony which goes like this: once in the Buddha’s time, a group of itinerant monks sought shelter by cohabitating in a residence during the rain retreat (vassavasa). But as they were large in number and as the time they would have to spend together was long, they became afraid if a conflict occurred during their stay. Hence to avoid the possible strife, they decided to remain silent for the entire period of three months.

When the Buddha learned it, he condemned it as a foolish measure. He said every member should get together to openly discuss what one might see as good or bad about the fellows so improvements could be made. Since then, it has been the ritual for the monks to assemble in a Dhamma hall after rain retreat when the Buddha would ask about their retreat in detail which was followed by counselling, suggestion or guidance according to the inconveniences they faced during the period. The idea of Dhamma hall is still prevalent in the Tai Buddhist tradition of Assam. Late Dibong Bhante or Ven. Warnasara said, “On Pavarana day, we the monastic community assemble in Seema Ghar (a hall that resembles Dhamma hall) where we recite Patimokkha (a set of rules of conduct for the monastic) aside Pavarana (a ritual pursuit).”

Apart from the Dhamma upadesha, Dhamma shravana, prayers, and offerings, releasing sky lantern or phom phai is an important episode of Pavarana. It is done to commemorate the historic event of the Buddha’s return from Tavatimsa heaven to Sankassa (a holy place of the Buddhist located in Farrukhabad district of Uttar Pradesh) after preaching the Abhidhamma to his mother Mayadevi during rain retreat. It is believed that during his journey back to earth, all the gods welcomed him with flowers and garlands and lit lamps to lighten his path. Since then, the ritual of sky lantern started.

Like other solemn Buddhist ceremonies, Pavarana is also a festive manifestation of the followers’ admiration of the Buddha’s instructions on various aspects of life. The joy, merriment, and devotion of the Assamese Buddhist in celebration of Pavarana demonstrate their fidelity to the teachings of the Enlightened.