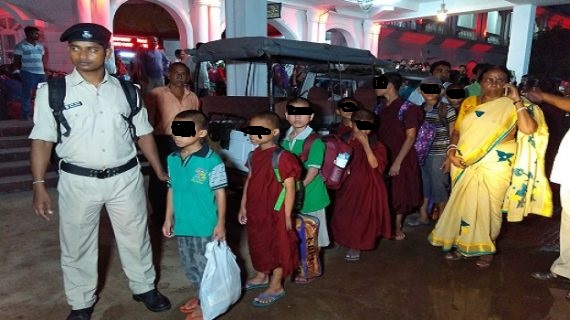 Children rescued from a Buddhist school and meditation center in Bodh Gaya in Bihar in August last were brought back to home state on Friday. Photo: Pinaki Das

Altogether 18 children who were rescued from a Buddhist school and meditation center in Bodh Gaya  in Bihar in August last were brought back to the home state on Friday.

Among the rescued 15 are from Tripura, two of the children were from Arunachal Pradesh while one from neighbouring Assam. The children had gone to Bihar to study Buddhist religion.

Bihar police on August 29 had taken into custody Bhante Shangpriya, the head monk of the Prajna Jyoti Buddhist School and Meditation Centre at Mastipur village in Bodh Gaya under POSCO for allegedly sexually abusing the children who were studying there.

Today the children reached Agartala by train and at the station they were handed over to the Child Line in presence of their guardians. State Child Rights Commission and Tripura Health Minister Sudip Roy Barman maintained close coordination on the entire incident with the Bihar police.

Though the children, their guardians or the Bihar police avoided disclosing the entire episode, all are happy that the children could return home.

The children, however, complained that they were thrashed, mistreated by the monk while staying in the school.

Earlier 15 children from Assam were rescued from and on the basis of their complaint Bihar police intervened in the incident.