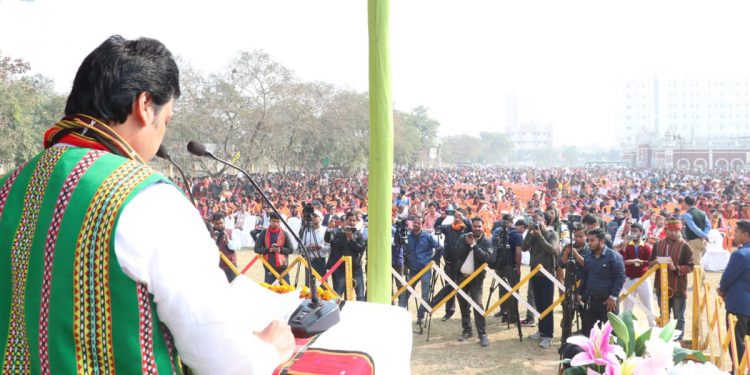 All but one chief minister in Tripura’s post-royal history have been Bengalis – and none of them ever delivered a public speech in Kokborok, the language of the state’s indigenous tribespeople.

Many old-timers say the state’s first communist chief minister Nripen Chakrabarty knew Kokborok and spoke a smattering of it, having picked it up during his days in the hills when his party was underground and primarily rooted amongst the tribals.

But one cannot remember Chakrabarty delivering a public speech in Kokborok.

His successor and long-time comrade Dasarath Deb was tribal and delivered speeches in both Bangla and Kokborok.

But their successor Manik Sarkar was a typical urban Bengali – like the Congress and Janata Party chief ministers of the 1960-70s and none spoke Kokborok or ever made an attempt to speak the language.

On Sunday, BJP’s first CM Biplab Deb, who hails from a Bengali refugee family, made history by delivering a speech in the language of the tribals.

That the speech in Kokborok was made to celebrate the 42nd Kokborok Day was particularly significant.

“People can learn any language if they accept it by heart—one just needs to develop such a mentality. In Tripura out of the 32 percent indigenous population, 29 percent speak Kokborok,” Deb said after the speech.

During the same programme at Umakata mini stadium last year, Deb had committed to address his next speech on this occasion in Kokborok .

“He obviously made a huge effort to learn Kokborok so that he could emotionally connect to the tribals. This is very laudable,” said Pranab Sarkar, chief editor of TB channel Headlines Tripura.

Two days ago, Deb became the first non-Kokborok speaking Chief Minister of Tripura to deliver a speech in Kokborok language in the state assembly.

That is something the royal scion Pradyot Kishore Manikya is not able to do though he uses his royal lineage to project himself as the leader of the indigenous people.

He neither delivers his speeches in Kokborok nor Bengali, the two most important languages of the state.

“Being the Chief Minister, I am happy to address the Kokborok-speaking people in their mother tongue. I prepared the speech only last night,” he said while congratulating the indigenous people on this auspicious day.

The CM also announced to cabinet decision of renaming of Barmura hill range as “Hathai Kotor”.

In another note, the Chief Minister said the state government had already sent a proposal to Centre for sanctioning special package of over Rs. 8,000 crore for the development of tribal people and the proposal is under consideration.

“We also initiated more measures to empower the ADC— the number of seats to be increased from 30 to 50 (including nominated) along with 42 departments,” Deb said.

The Chief Minister in his speech said the state government is committed for the development of Kokborok language.

“Earlier, Kokborok subject was being taught in 94 senior basic, 52 Madhyamik schools and 20 Higher Secondary. Now, the numbers have increased to 139, 100 and 41 respectively,” Shri Deb said adding that the state government had declared twelve tribal-dominated backward blocks as “aspirational block”.

Apart from this, the state government is working in every sector– Healthcare, Education, and Infrastructure for the development of Indigenous people.

“When we shall go to the people before 2023 elections, we shall present a report card of development. If people are satisfied, they will vote for us,” Deb said.