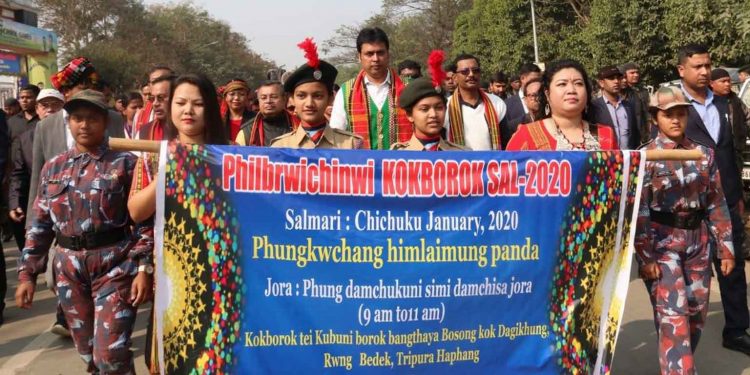 Tripura CM Biplab Deb with others taking part in a rally organised on the occasion of 42nd Kokborok Day on Sunday. Image: Northeast Now

Baramura Hills in Tripura from now on will be known as Hatai Kotar, announced Chief Minister Biplab Deb on Sunday.

He was speaking at the 42nd Kokborok Day celebrations in Agartala.

Biplab Deb gave his entire speech in Kokborok language and said the beauty of the language must be preserved.

Baramura Hills is located near capital Agartala on the Assam-Agartala National Highway.

Kokborok is the Sino-Tibetan native language of the Borok (Tripura) people of Tripura and neighbouring areas of Bangladesh.

The name is derived from Kok meaning “verbal” and Borok meaning “human”.

Kokborok is closely related to the Bodo, Dimasa and Kachari languages of Assam.

Kokborok was declared an official language of the state of Tripura, India by the state government in the year 1979.

It has been taught in schools of Tripura from the primary level to the higher secondary stage since the 1980s.

On the occasion of Kokborok Day, a procession was taken out in Agartala and was attended by Chief Minister, several cabinet ministers, students and several others.