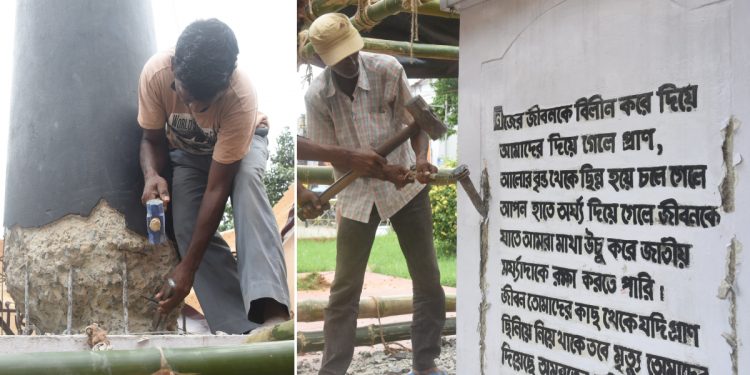 Citizens of Bangladesh have expressed deep concern over demolition of memorials of 1971 Bangladesh liberation war in Agartala, Tripura.

Intellectuals from Bangladesh have urged the authorities in India to stop demolition and restoration of the Liberation War.

As many as twenty intellectuals from Bangladesh have issued a joint statement said that the 1971 Bangladesh liberation war memorials in Agartala are historic reminiscent of the war.

“These memorials are testimony of the sacrifices of the warriors of India and Bangladesh,” said the statement.

The Bangladeshi intellectuals claimed that the huge support from the people of India and Tripura especially during the liberation war of 1971 is an integral part of the history of Bangladesh’s independence.

“We request the Indian authorities to restore the monument to its rightful place in its proper place and to preserve the symbolic monuments of the relationship between the people of the two countries,” the statement added.

The intellectuals further said, “The 40-foot-tall Martyr’s Memorial at Post Office Chowmuhani at the heart of Agartala city, the capital of Tripura, is one of the most important monuments to the common liberation aspirations and friendship of the people of India and Bangladesh.”