Tripura CM to hold ‘Jantar Darbars’ in all districts 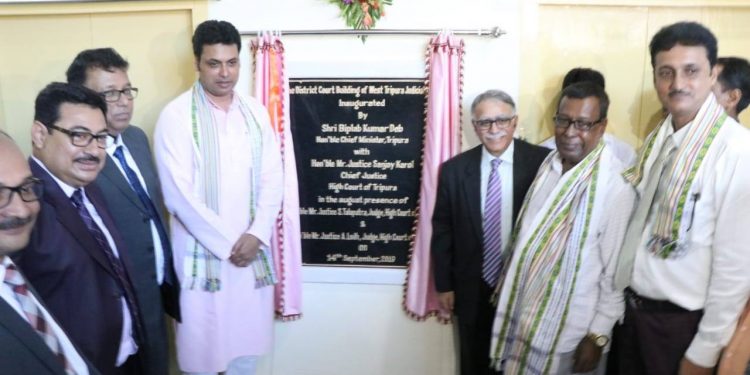 Tripura chief minister Biplab Kumar Deb on Saturday said that he will soon make facilities of setting up Janatar Darbar (public courts) in all districts of the state to establish direct communication with people in order to provide solution to their problems.

While inaugurating the newly constructed court building of West Tripura district, Deb said that he said that he could not have direct communication with people to listen to their problems due to shortage of time as a result of his busy schedule.

Also read: Government not to interfere in matter of judiciary: Tripura CM

He claimed that he immediately responds to people who seek his help through his Facebook page.

After coming to power in 2018, Deb used to hold Jantar Darbar in Agartala.

He said that he will set up the concept of holding Jantar Darbar in every district of the state soon for face to face communication with people and then address their problems.

Deb asked the judges of the state to take strict action against drug peddlers, land mafias and people who commit crime against women.

He claimed that Tripura is the first state in the north-east region to start initiatives to make the state drug-free.

Referring to Union Home Minister Amit Shah’s comment to make the north-east a drug-free region by 2022 at a recent meeting of the North Eastern Council (NEC) in Guwahati, the chief minister hoped that the state would achieve the target of being drug free before 2022.

Deb had recently announced that he will donate his six months’ salary for installing dustbins in 1100 markets in rural areas across the state as a mark of celebrating Seva Saptah in honour of Prime Minister Narendra Modicm’s birthday.