Government not to interfere in matter of judiciary: Tripura CM 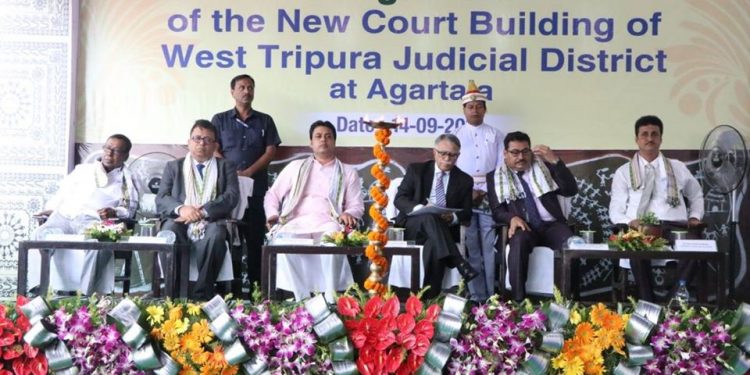 The construction work was started in August 2014 and it has cost Rs 14.90 crore to build the court building.

In the programme Biplab Deb said, “The State Government is trying to make Tripura a model state.”

“To make Tripura a model state the help of the lawyers is also required,” he added.

According to the chief minister, a model state is only possible with a model judicial system.

He said, “I want everyone’s help to reduce crime against women in Tripura.”

“Convicts must not be set free without proper justice,” he added.

He also said, “Judiciary is the powerful pillar of democracy.”

Biplab was of the opinion that advocates of Tripura are talented and hard working.

“Advocates and judges of Tripura must be called to other states to give their services,” he added.

He further said, “We want to see the advocates of our State working at Supreme Court.”

“I would like to urge our advocates and judges to help in building Tripura a crime free state,” he added.

He said, “I believe more number of women should join the judicial system and contribute, as they have a helping mentality.”

The chief minister also assured that his government will not interfere in the matter of Judiciary.