Around 57,906 electorates have exercised their franchise in the polls 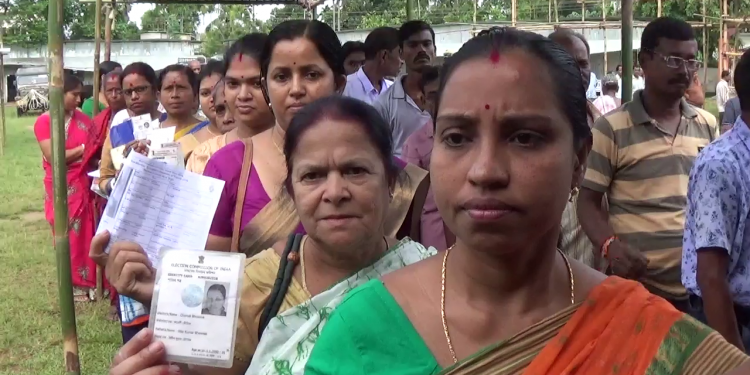 Voters standing in a queue to cast their votes at a polling booth in Tripura’s Badharghat (SC) assembly constituency on Monday.

Over 79 per cent voters turn out recorded in the Badharghat Assembly by-poll in Tripura on Monday.

An election official said that around 57,906 electorates have exercised their franchise in the polls.

“At 5 p.m., over 79 per cent of the total electorate have cast their votes. The final polling percentage is likely to increase as few hundred voters are still in the queue after the end of the scheduled time of balloting which is 5 p.m,” Tapan Kumar Das, additional district magistrate of West Tripura district told reporters.

He said no the poll was peaceful and no untoward incident was reported from anywhere in the constituency.

“Election officials have immediately dealt with some complaints received from the candidates and the contesting parties,” Das added.

He further said security personnel have dispersed hundreds of unauthorised gatherings violating the prohibitory order under Section 144 of CrPc in the Badharghat Assembly segment.

The by-poll to the Badharghat seat was necessitated following the death of sitting BJP legislator Dilip Sarkar.

The counting of votes will take place on Friday.