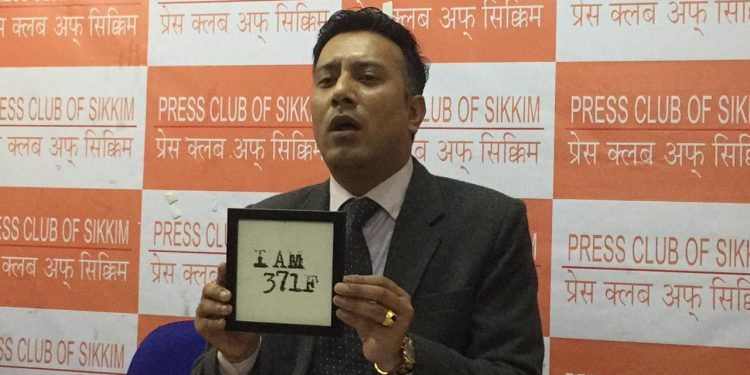 A social and political activist and Independent parliamentary election candidate from Sikkim, Passang G Sherpa has launched a social awareness campaign, ‘I am 371F’ in Gangtok on Thursday.

The main objective of this campaign was to reach out to every Sikkimese to apprise them about the intricacies of the special provisions guaranteed to Sikkim by the Indian Constitution and to empower them to stand up and take a decision for the future of Sikkim.

Addressing a press conference in Gangtok on Thursday, he said, “In order to resolve and redress the issues faced by Sikkim and to safeguard the present and future of every Sikkimese, it is pertinent to sensitize every Sikkimese individual about their rights and duties as enshrined under Article 371F of the Constitution of India.”

He expressed that that this social awareness campaign has been designed to uplift and empower the people of Sikkim through knowledge so they can participate in safeguarding the rights and future of Sikkim and its people.

Sherpa alleged that hope and aspirations held by the Sikkimese people during the time of merger with India remains unfulfilled even till this day.

“The core political issues of Sikkim are pending for more than four decades after our integration with the Republic of India and these unresolved political problems have resulted in alienation, disparity, fragmentation, dissent and discontentment in our society today,” he added.

He further alleged that inability to provide lasting solutions to Sikkim’s political problems by both, the State government and the Central government has started manifesting itself in various forms in our society today. He added that confusion and apprehension among the people of Sikkim while dealing with these problems was largely attributed to the lack of understanding of Article 371F. He mentioned that a large section of the society has little or no knowledge about Article 371F of the Indian constitution.

Responding to media queries, Sherpa said, “This is not Passang Sherpa campaign but I am just the initiator and now gradually the people of Sikkim would connect with this campaign.”

He stated that there will be debates, discussion and deliberation on the Article 371F and its related issues and then after their will be deliverance of its outcome to all corners of the State.