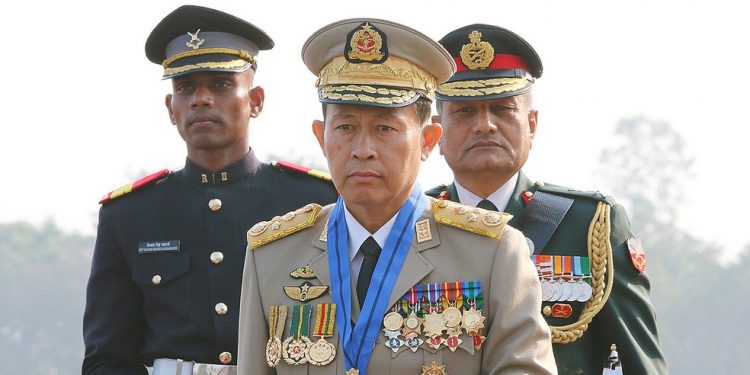 Myanmar’s powerful military has warned against any constitutional change that would undermine the ‘existing structure’ of the national polity.

The Army’s deputy commander-in-chief, Vice Senior General Soe Win said at a recent ceremony that the country’s constitutional reform efforts should be in line with existing law.

Speaking at the 74th Armed Forces Day at capital Nayphitaw, General Soe Win said that any effort to change the constitution through popular power rather than legal means would disrupt Myanmar’s stability.

He warned against implementing the desire of the majority without considering what other stakeholders want, calling it a violation of the rules.

Many would see that as a threat of direct military intervention if the ruling National League for Democracy or NLD tries to carry out changes that may deny the military the one-fourth representation it now enjoys in the parliament and also control over three key ministries of Home, Defence and Border Affairs.

The army’s legislators had lodged a silent protest against the formation of a parliament committee to change the constitution earlier this year.

But when the ruling NLD pressed on with it and formed the committee, the army seems to be upset.

The NLD would like to change a provision that denies any Burmese in relationship with a foreigner to contest top positions like President and Vice-President.

This provision in the 2008 Constitution was seen as an attempt to deny Aung San Suu Kyi the Presidency because she has two sons from her marraige with British professor Michael Aris who died sometime ago.

Top sources close to the military say the army is seeking a deal on constitutional changes, by which it allows a change of this provision and allows Suu Kyi the top job but in return ensure that the military representation in parliament remains at the present level (25 per cent) and its control of three key ministries is not changed.

Suu Kyi, who got round the Constitution by creating the position of ‘State Counsellor’ which she holds and which helps her function as de facto president , is keen to affect constitutional changes and make Myanmar an ‘authentic democracy’ to fulfil an electoral promise.

That becomes more relevant as the 2020 polls draws near.