SCs in Assam to demand autonomy if neglect by govt continues

It is time that the people and all 70 organisations which were opposing the Citizenship Bill unite and form a third front: Rubul Das 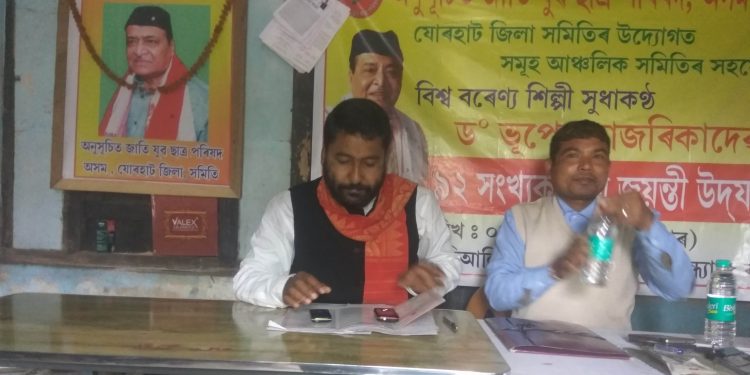 The president of Anusuchit Jaati Juva Chatra Parishad, Assam (Scheduled Caste Students’ Association, Assam) Rubul Das on Tuesday slammed both the BJP and the Congress, which he said, were out to destroy Assam.

Addressing a press conference here ahead of the foundation day celebration of the organisation, scheduled to be held centrally at Jorhat district library on Thursday, Das said the people had looked with high hopes at the BJP to bring in a change but they have betrayed all.

This was evident from BJP’s national president Amit Shah‘s assertion that the Citizenship (Amendment) Bill, 2016 would be passed when they come to power again, said Das.

“It is time that the people and all 70 organisations which were opposing the Citizenship Bill here unite and form a third front against both the Congress and BJP for the forthcoming Lok Sabha elections,” he said.

Das hinted that the foundation day function would witness such a coming together of all organisations including AGP and KMSS.

He denounced Assam chief minister Sarbananda Sonowal saying that he has fallen from the pedestal of ‘Jatiya Nayak’ to ‘Khalnayak’ and would go down in the history as one of the worst chief ministers Assam has ever had,

Regarding uplift of the Scheduled Caste community, Das further said that in this year’s budget only 2 per cent has been given to the SCs whereas the usual allotment was 6.2 per cent.

“This year, the government has not announced any scholarship for the SCs nor any scheme for the upliftment of the fishing community. We are all very insecure and cannot say that economically, we are advanced in any way despite the 7,5 per cent reservation,” he said.

Das said the BJP-led government was very fond of Shilanyas and bhumi pujans but after that there was nothing as was evident from the non construction of a SC hostel in Jorhat after funds were announced and the foundation stone laid.

“Rs 1 crore amount announced for construction of our Sati Radhika Devi Samanway Kshetra at Majuli by finance minister Himanta Biswa Sarma but we do not expect more than a foundation stone to be laid.,” he said.

Das stated that soon after Majuli became a district, the Chief Minister, who has been elected from Majuli, announced an award of Rs 1 lakh in the name of Sati Radhika Devi but till today, two years after no one had been given the award,

Das said if things continue in this manner, the community would seek autonomy just like the Scheduled Tribes are doing all over Assam.