RTI activist and convenor of Swaraj Asom, Bhaben Handique, on Wednesday demanded that the nomination of Hojai’s BJP MLA Shiladitya Dev be rejected by Election Commission of India for mismatch of his declarations on educational certificates submitted in 2011 and 2016 Assembly polls.

The RTI activist during a press conference alleged, “The declarations about his educational certificates submitted by Shiladitya Dev before the Election Commission in 2011 and 2016 Assam Assembly elections do not match.”

Handique on behalf of Swaraj Asom demanded a probe into the matter. 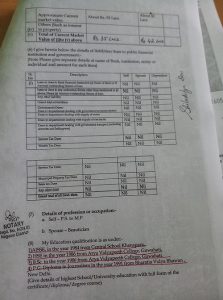 Handique also said, “Shiladitya is a supporter of Hindu Bangladeshis and has been making communal statements.”

Expressing doubt over Shiladitya’s citizenship, Handique said, “He too may be a D-voter for which he has been supporting the BJP-led Central government’s move to grant Indian citizenship to illegal migrants by implementing the Citizenship (Amendment) Bill 2016.”

Handique said that as per the educational certificates submitted by the Hojai MLA before 2011 Assam Assembly elections he cleared Class 10 examination from the Central School, Khanapara in Guwahati.

“In his affidavit submitted to the Election Commission during 2011 Assembly polls, Dev declared that he had cleared his Higher Secondary and B.Sc Examination in 1986,” he added.