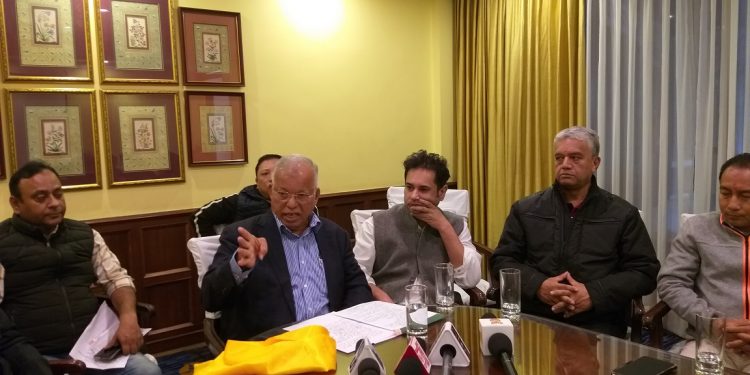 All India Congress Committee (AICC) general secretary in-charge of north-eastern states (excluding Assam), Luizinho Faleiro stated that the Centre has provided huge amount of money to Sikkim in last 43 years but the regional parties governments have not able to convert it into the tangible development.

He added that Sikkim has been electing the regional party governments only since 43 years so there was no much development and progress in the State.

Addressing a press conference in Gangtok on Friday, Faleiro stated that by working on the aspiration of the people of Sikkim the Congress party has been working to united all oppositions of Sikkim.

He added that the party was open for all and was in the touch with SKM and HSP. However, he added that in case of no any coalition the party was even ready to go alone in the upcoming elections in all 32 seats in the State.

He informed that the party has asked district level committee to identify winnable candidates and to submit the report to the state committee. He stated that the party would reach out every household of Sikkim.

Faleiro alleged UPA government had provided much development and progress to Sikkim but it has not transform into the reality. He alleged that SDF government has taken Sikkim backward.

Faleiro stated that the Congress party has always respected the unique identity, culture and tradition of Sikkim and provided the special provisions for the safeguard of Sikkim and interest of its people.

He mentioned that the Congress party has provided the special provisions, exemption on income tax to Sikkim subjects and their descendents and special schemes for Sikkim.

He alleged that the biggest threat to Sikkim was the Prime Minister and RSS which have been trying to destroy the unique identity, culture and tradition of Sikkim and north-eastern region in the general.

Faleiro criticised and condemned SDF party and its MP PD Rai for supported the Citizen Amendment Bill. He added that the support was the betrayal of SDF party to the people of Sikkim and such bill would open the floodgate for people from other countries.

It is informed that Sikkim Pradesh Congress Committee (SPCC) has convened a meeting at its party office on Friday, which was attended by Faleiro, AICC secretary in-charge for Sikkim, Pradyot Deb Barman, AICC observers for Sikkim and state president Bharat Basent and other leaders of SPCC.

The meeting has thoroughly discussed on different issues of Sikkim and passed resolutions. The meeting has also observed one minute silence for victims of Jammu and Kashmir terror attack.