As the date of publication of the second updated draft of the NRC draws closer, Assam Government appears to be building up a massive security arrangement across the length and breadth of the State.

Significantly, this is not for the first time that the Government is adopting such a measure. In the weeks that preceded the publication of the first updated draft of the NRC, the Assam Government initiated similar measures while setting its machinery on top gear to make wide publicity in various forums that all security arrangements were in place to counter any law and order situation that might arise in the wake of the publication of the draft.

Further, at that point of time, the Government was also crystal clear in making public that  soon after the publication of the said draft, the process of the preparing the next draft, incorporating the names of all genuine Indians on the basis of further verification, would be taken up.

It may now be pertinent to recall that not a single instance of violence or law and order situation cropped up in the wake of the publication of the first updated draft of the NRC. The people of Assam have proved to the hilt that they are a patient and peace loving lot. 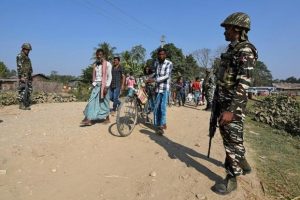 However, the chorus-like announcements by the Government about security build up prior to the publication of the first draft let loose a phobia of fear and panic in a sizable section of the public. Obviously, the question arises as to what might have been the real motive of the Government at that point of time in making such unprecedented publicity about the security arrangements being made.

The Government may furnish an instant answer that all such arrangements were made on the basis of intelligence inputs. While no compromise can be made on the security front and accepting the fact that the Government was bound to go by the inputs, irrespective of the same being credible or not, the publicity part could certainly have been avoided and thousands prevented from being gripped by panic phobia.

Now that the publication of the second draft is just a few days away, a panic situation has re-emerged among some with full throated publicity on security arrangements to squarely confront any law and order situation that may arise after the publication of the second draft. Virtually assuming the shape of a chorus, beginning with the ruling party heavyweights, bureaucrats and top cops, the same song on security build up has now been sung for quite sometime.

While the people of the State are already tormented by issues like the controversial Citizenship (Amendment) Bill, 2016, back breaking price hike and floods – to name just a few – a sizable section is fear-stricken as to what might be in store on the security front.

On both the occasions, the Government could have avoided the publicity stunt. Unfortunately, that was not to be.

However, considering the fact that the ruling dispensation has made several U-turns on poll promises or brought in the obnoxious ‘original inhabitant’ factor in the NRC updating process (till the Supreme Court came to the rescue of the people of Assam), one is bound to suspect that the powers that be have some other card(s) up their sleeves.

When, where or how the card(s) would be thrown open is in the hands of the powers that be. As of now, everything remains embedded in the womb of time. In any case, the Government must bear in mind that the people need peace. Even metaphoric threat to peace is not acceptable.