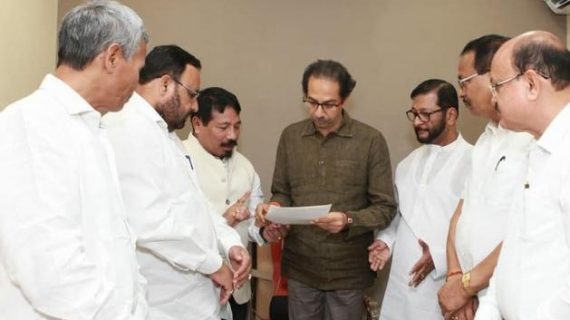 The Asom Gana Parishad (AGP) is continuing its crusade to garner support from outside the state of Assam to add more teeth to its opposition to the controversial citizenship bill.

A delegation of the regional party led by its president Atul Bora called on Shiv Sena chief Uddhav Thackeray in Mumbai on Saturday.

Notably, the AGP had managed to garner support in its protest against the Citizenship (Amendment) Bill, 2016 from the ruling Janata Dal-United (JD-U) in Bihar recently.

Now, the meeting with Shiv Sena chief Uddhav Thackeray assumes much significance as it is most influential regional party on Maharashtra.

The AGP delegation apprised Shiv Sena chief Uddhav Thackeray about the adverse effects the bill will have on the demography of Assam. The delegation, it is learnt also impressed upon the Shiv Sena chief that the bill once introduced in Assam will relegate the Assam Accord.

Highlighting that the bill will herald imminent danger to the language, culture and the very identity of the indigenous population of the State, the AGP delegation also submitted a memorandum to the Shiv Sena chief to oppose the citizenship bill.

The AGP delegation also urged Thackeray to impress upon his parliamentarians to oppose the bill.

Notably, the AGP has been agitating and mobilizing support against the citizenship bill at various levels both in Assam and also outside it.

Later AGP president apprised that Thackeray had extended positive support towards their plea.

Earlier on June 12, a delegation of AGP led by Atul Bora called on Union Minister for Home Affairs Rajnath Singh and demanded scrapping of the Citizenship (Amendment) Bill, 2016 by reiterating the party’s strong opposition.

The delegation also submitted a memorandum before Rajnath Singh and urged not to provide Indian citizenship to illegal migrants including Hindu Bangladeshis on the basis of religion.