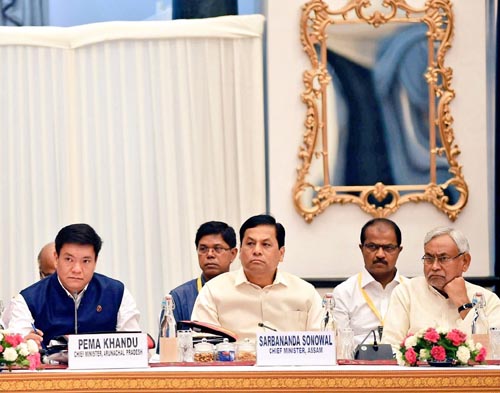 Chief Minister Sarbananda Sonowal attended the 4th meeting of the Governing Council of NITI Aayog, in New Delhi under the chairmanship of Prime Minister Narendra Modi on Sunday.

Sonowal said that the Government of Assam gives utmost importance to implementation of the development agenda set by the Union Government to ensure faster economic growth of the state.

Taking part in the meeting, Chief Minister Sonowal underlined the significant gains made in revenue collection and capital expenditure as well as implementation of different flagship schemes. He also informed about the measures taken up by the state government to ensure transparency and remove corruption in implementation of government schemes.

He also informed that the transition to GST in Assam, has been hassle free. He further added that the state government has developed the seven-year strategy plan and three-year action plans for different sectors, keeping Sustainable Development Goals in view as advised by NITI Aayog.

Informing the new initiatives of the state government, Sonowal highlighted the Chief Minister Samagra Gramya Unnayan Yojana, which is to be implemented with financial outlay of Rs. 30,000 crore covering all 25,425 villages of the State to double farmers’ income by 2022. He also informed that the state government has launched its own scheme Atal Amrit Abhiyan covering 92 per cent of population with annual income less than Rs 5 lakhs for 6 critical disease groups. Till date, 2500 persons have availed cashless treatment under the scheme in empanelled public and private hospitals, he added

He also informed that so far 9.51 lakh farmers have been provided with soil health cards in the state. Meanwhile, works for second cycle has also been started and distribution of cards will be completed by March 2019. He also said that the state government has taken up up gradation of 10 wholesale markets and 65 rural haats under World Bank aided project, APART

Vice-Chairman of NITI Aayog Rajiv Kumar, several Union Ministers, Chief Ministers of States, members of the Governing Council, officials of the Union and the State governments were present.